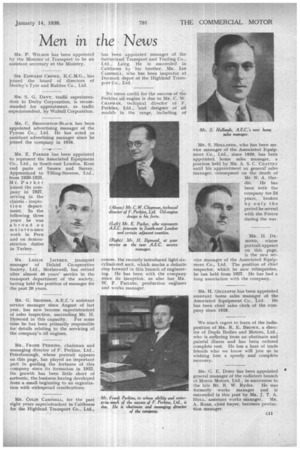 Page 9, 14th January 1938 — Men in the News
Close
Noticed an error?
If you've noticed an error in this article please click here to report it so we can fix it.
Keywords : Business / Finance

MR. P. WILSON has been appointed by the Minister of Transport to be an assistant secretary at the Ministry.

SIR EDWARD CROWE, K.C.M.G., has joined the board of directors of Henley's Tyre and Rubber Co., Ltd.

MR. E. PARKER has been appointed to represent the Associated Equipment Cio., Ltd., in South-east London, Kent and parts of Sussex and Surrey. Apprenticed to Tilling-Stevens, Ltd., from 1920-1925, Mr. Parker joined the company in 1927, serving in the chassis inspection department. In the following three years he was abroad on maintenance work in Peru and on demonstration duties in Turkey.

MR, LESLIE JAFFREY, transport manager of Dalziel Co-operative Society, Ltd., Motherwell, has retired after almost 40 years' service in the transport department of the society, having held the position of manager for the past 20 years.

MR. G. SKINNER, A.E.C.'s assistant service manager since August of last year, has now become superintendent of sales inspection, succeeding Mr. II. Dymond in this capacity. For some time he has been primarily responsible for details relating to the servicing of the company's oil engines.

MR, PRANK PERKINS, chairman and managing director of F. Perkins, Ltd., Peterborough, whose portrait appears on this page, has played an important part in guiding the fortunes of this company since its formation in 1932. Its growth has been little short of meteoric, the business having developed from a small beginning to an organization with widespread ramifications.

No mean credit for the success of the Perkins oil engine is due to MR, C. W. CHAPMAN, technical director of F. Perkins, Ltd., and designer of all . models in the range, including, of

course, the recently introduced light sixcylindered unit, which marks a definite step forward in this branch of engineering. He has been with the company since its inception, as also has MR. W. F. PAILING, production engineer and works manager.

MR. S. HoLLANns, who has been service manager of the Associated Equipment Co., Ltd., since 1929, has been appointed, home sales manager, a position held by MR. A. S. C. •CnATTEY until his appointment as general' sales manager, consequent on the death of Mr. N. A. Hardie. He has been With the company for 24 years, broken by only the period he served with the Forces during the war.

MR. H. DYMOND, whose portrait appears on this page, is the new service manager of the Associated Equipment Co., Ltd. The position of chief inspector, which he now relinquishes, he has held from 1927. He has had a long association with the company.

' MR. H. GILLESPIE has been appointed assistant home sales manager of the Associated Equipment Co., Ltd, He has been chief sales clerk of the company since 1928.

We much regret to learn of the indisposition of MR. R. E. BuowN, a director of Duple Bodies and Motors, Ltd., who is suffering from an .obstinate and painful illness and has been ordered complete rest. He has a host of trade friends who we know will join us in wishing him a speedy and complete recovery.

MR. G. E. Dom has been appointed general manager of the radiators branch of Morris Motors, Ltd., in succession to the late Mr. R. W. Ryder. He was formerly works manager and is succeeded in this post by Ma. J. T. A. Hum., assistant works manager. MR. A. Rosa, chief buyer, becomes production manager.