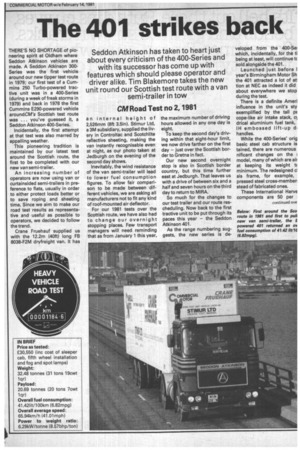 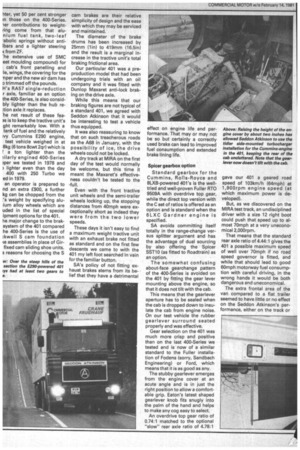 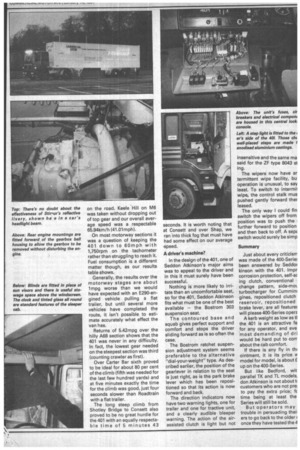 Page 35, 14th February 1981 — The 401 strikes back
Close
Noticed an error?
If you've noticed an error in this article please click here to report it so we can fix it.
Keywords : Articulated Vehicles, Semi-trailer Truck, Road Train, Trailer, Semi-trailer

Seddon Atkinson has taken to heart just about every criticism of the 400-Series and with its successor has come up with features which should please operator and driver alike. Tim Blakemore takes the new unit round our Scottish test route with a van semi-trailer in tow

Incidentally, the first attempt at that test was also marred by appalling weather.

This pioneering tradition is maintained by our latest test around the Scottish route, the first to be completed with our new van semi-trailer.

An increasing number of operators are now using van or curtainsided semi-trailers in preference to flats, usually in order to either protect loads better or to save roping and sheeting time. Since we aim to make our road test results as representative and useful as possible to operators, we decided to follow the trend.

Crane Fruehauf supplied us with the 12.2m (40ft) long FB 8038-F2M dryfreight van. It has an internal height of 2,526mm (8ft 3.5in). Stimur Ltd, a 3M subsidiary, supplied the livery in Controltac and Scotchlite reflective sheeting, making the van instantly recognisable even at night, as our photo taken at Jedburgh on the evening of the second day shows.

Inevitably, the wind resistance of the van semi-trailer will lead to lower fuel consumption figures. To allow fair comparison to be made between different vehicles, we are asking all manufacturers not to fit any kind of roof-mounted air deflector.

For our 1981 tests over the Scottish route, we have also had to change our overnight stopping places. Few transport managers will need reminding that as from January 1 this year, the maximum number of driving hours allowed in any one day is eight.

To keep the second day's driving within that eight-hour limit, we now drive farther on the first day — just over the Scottish border to Gretna in fact.

Our new second overnight stop is also in Scottish border country, but this time further east at Jedburgh. That leaves us with a drive of between six and a half and seven hours on the third day to return to MIRA.

So much for the changes to our test trailer and our route rescheduling. Now back to the first tractive unit to be put through its paces this year — the Seddon Atkinson 401.

As the range numbering suggests, the new series is de

veloped from the 400-Sei which, incidentally, for the ti being at least, will continue tc sold alongside the 401.

Launched just before I year's Birmingham Motor Sh the 401 attracted a lot of at lion at NEC as indeed it did about everywhere we stop during the test.

While the 400-Series' orig basic steel cab structure is tamed, there are numerous nificant changes on the model, many of which are air at keeping its weight tc minimum. The redesigned cl sis frame, for example, pressed steel cross-member. stead of fabricated ones.

These International Nerve components are 50 per

riter, yet 50 per cent stronger in those on the 400-Series. ler contributions to weightring come from that alunium fuel tank, two-leaf .abolic springs without antibars and a lighter steering K from ZF.

he extensive use of SMC eet moulding compound) for cab's front panelling and le, wings, the covering for the nper and the new air dam has o trimmed off the pounds.

H's RA57 single-reduction r axle, familiar as an option the 400-Series, is also considbly lighter than the hub re:tion axle it replaces.

'he net result of these fea3S is to keep the tractive unit's ght remarkably low. With a tank of fuel and the relatively ivy Cummins E290 engine, test vehicle weighed in at 8kg (6 tons 8cwt air) which is

an operator is prepared to nd an extra £900, a further kg can be chopped from the .'s weight by specifying aluium alloy wheels which are uded in the list of special ipment options for the 401. he major change to the braksystem of the 401 compared he 400-Series is the use of :kwell S cam foundation (e assemblies in place of Girfixed cam sliding shoe units.

s reasons for choosing the S cam brakes are their relative simplicity of design and the ease with which they may be serviced and maintained.

The diameter of the brake drums has been increased by 25mm (1n) to 419mm (16.5in) and the result is a marginal increase in the tractive unit's total braking frictional area.

Our particular 401 was a preproduction model that had been undergoing trials with an oil company and it was fitted with Dunlop Maxaret anti-lock braking on the drive axle.

While this means that our braking figures are not typical of a standard 401, we agreed with Seddon Atkinson that it would be interesting to test a vehicle thus equipped.

It was also reassuring to know that on such treacherous roads as the A68 in January, with the possibility of ice, the drive wheels could not be locked.

A dry track at MIRA on the first day of the test would normally be welcome, but this time it meant the Maxaret's effectiveness couldn't be tested to the -full.

Even with the front tractive unit wheels and the semi-trailer wheels locking up, the stopping distances from 40mph were exceptionally short as indeed they were from the two lower speeds.

These days it isn't easy to find a maximum weight tractive unit with an exhaust brake not fitted as standard and on the first few descents we came to with the 401 my left foot searched in vain for the familiar button.

SA's policy of not fitting exhaust brakes stems from its belief that they have a detrimental effect on engine life and performance. That may or may not be so but certainly a correctly used brake can lead to improved fuel consumption and extended brake lining life.

Spicer gearbox option Standard gearbox for the Cummins, Rolls-Royce and 8LXB-powered 401's is the welltried and well-proven Fuller RTO 9509A with overdrive top gear, while the direct top version with the C set of ratios is offered as an option and is standard when the 6LXC Gardner engine is specified.

SA avoids committing itself totally in the range-change versus splitter argument and has the advantage of dual sourcing by also offering the Spicer SST10 (as fitted to Roadtrain) as an option.

The somewhat confusing about-face gearchange pattern of the 400-Series is avoided on the 401 by fitting the gear lever mounting above the engine, so that it does not tilt with the cab.

This means that the gearlever aperture has to be sealed when the cab is dropped down to insulate the cab from engine noise. On our test vehicle the rubber gearlever surround seated properly and was effective.

Gear selection on the 401 was much more crisp and positive than on the last 400-Series we tested and is now of a similar standard to the Fuller installation of Fodens (sorry, Sandbach Engineering) or Ford, which means that it is as good as any.

The stubby gearlever emerges from the engine cover at an acute angle and is in just the right position to allow a comfortable grip. Eaton's latest shaped gearlever knob fits snugly into the palm of the hand and helps to make any cog easy to select.

But, as we discovered on the MIRA test track, an undisciplined driver with a size 12 right boot could push that speed up to almost 70mph at a very uneconomical 2,000rpm.

That means that the standard rear axle ratio of 4.44:1 gives the 401 a possible maximum speed of well over 70mph if no road speed governor is fitted, and while that should lead to good 60mph motorway fuel consumption with careful driving, in the wrong hands it would be both dangerous and uneconomical.

The extra frontal area of the van compared to a flat trailer seemed to have little or no effect on the Seddon Atkinson's performance, either on the track or on the road, Keele Hill on M6 was taken without dropping out of top gear and our overall average speed was a respectable 65.94km/h (41.01mph).

On most motorway sections it was a question of keeping the 401 down to 6 Omph with 1,750rpm on the tachometer rather than struggling to reach it. Fuel consumption is a different matter though, as our results table shows.

Generally, the results over the motorway stages are about 1mpg worse than we would have expected with an E290-engined vehicle pulling a flat trailer, but until several more vehicles have completed the route, it isn't possible to estimate accurately what effect the van has.

Returns of 5.42mpg over the hilly A68 section shows that the 401 was never in any difficulty. In fact, the lowest gear needed on the steepest section was third (counting crawler as first).

Over Carter Bar sixth proved to be ideal for about 80 per cent of the climb (fifth was needed for the last few hundred yards) and at five minutes exactly the time for the climb was good, just four seconds slower than Roadtrain with a flat trailer.

The long steep climb from Shotley Bridge to Consett also proved to be no great hurdle for the 401 with an equally respectable time of 5 minutes 43 seconds. It is worth noting that at Consett and over Shap, we ran into thick fog that must have had some effect on our average 'speed.

In the design of the 401, one of Seddon Atkinson's major aims was to appeal to the driver and in this it must surely have been successful.

Nothing is more likely to irritate than an uncomfortable seat, so for the 401, Seddon Atkinson fits what must be one of the best available — the Bostrom 303 suspension seat.

The contoured base and squab gives perfect support and comfort and stops the driver sliding forward as is so often the case.

The Bostrom ratchet suspension adjustment system seems preferable to the alternative "dial-your-weight" type. As described earlier, the position of the gearlever in relation to the seat is just right, as is the park brake lever which has been repositioned so that its action is now forward and back.

The direction indicators now have two warning lights, one for trailer and one for tractive unit, and a clearly audible bleeper warning. The action of the airassisted clutch is light but not insensitive and the same ma said for the ZF type 8043 St ing.

The only way I could fin switch the wipers off from position was to push the further forward to position and then back to off. A sepa switch would surely be simp Summary Just about every criticism was made of the 400-Serie) been answered by Seddor kinson with the 401. lmpr corrosion protection, self-ac ing clutch, conventional change pattern, side-mot turbocharger for Cummin) gines, repositioned clutch reservoir, repositioned brake lever, are all featurel will please 400-Series opera A kerb weight as low as tl the 401 is an attractive fe for any operator, and eve most demanding of dri would be hard put to con about the cab comfort.

If there is any fly in thi ointment, it is its price v model for model, is about £ up on the 400-Series.

But like Bedford, wit parallel TK and TL models, don Atkinson is not about ti customers who are not prer to pay the extra price; fc time being at least the Series will still be sold.