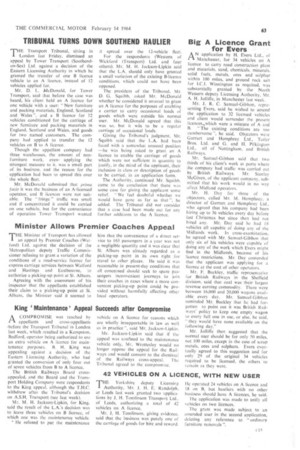 Page 65, 14th February 1964 — TRIBUNAL TURNS DOWN SOUTHEND HAULIER
Close
Noticed an error?
If you've noticed an error in this article please click here to report it so we can fix it.
Keywords : Traffic Law, Law / Crime

THE Transport Tribunal, sitting in -London last Friday, dismissed an appeal by Tower Transport (Southendon-Sea) Ltd. against a decision of the Eastern Licensing Authority in which he granted the transfer of one B licence vehicle to an A licence, instead of 12 vehicles applied for.

Mr. D. L. McDonald, for Tower Transport, said that before the case was heard, his client held an A licence for one vehicle with a user: "New furniture and packing materials, England, Scotland and Wales". and a B licence for 12 vehicles conditioned for the carriage of new furniture and packing materials in England, Scotland and Wales, and goods for two named customers. The company had applied to transfer the 12 vehicles on B to A licence.

Though the appellant company had three warehouses, the amount of nonfurniture work, evenapplying the strongest measure to it. was a small part of its business, and the reason for the application had been to spread this over the whole fleet.

Mr. McDonald submitted that prima fade it was the business of an A-licensed operator, and B licences were not suitable. The " fringe " traffic was small and if concentrated it could be carried on one vehicle, but for the convenience of operation Tower Transport wanted

it spread over the 12-vehicle fleet.

For the respondents (Westons of Wick ford (Transport) Ltd. and four others). Mr. M. H. Jackson-Lipkin said that the L.A. should only have granted a small variation of the existing B-licence conditions, which could not have been opposed.

The president of the Tribunal. Mr.

D. G. Squibb, asked Mr. McDonald whether he considered it unusual to grant an A licence for the purposes of enabling a carrier to carry occasional loads of goods which were outside his normal user. Mr. McDonald agreed that this was so. but it wis to be a regular carriage of occasional loads.

Giving the Tribunal's judgment, Mr. -Squibb said that the L.A. had been faced with a somewhat unusual position —he was being asked to grant an A licence to enable the carriage of goods which were not sufficient in quantity to justify, in the mind of the applicant, their inclusion in class or description of goods to be carried, in an application form.

The Authority, continued Mr. Squibb. came to the conclusion that there was some case for giving the applicant some relief. "We feel doubtful whether we would have gone as far as that', he added. The Tribunal did not consider that a case had been made out for any further additions to the A licence.