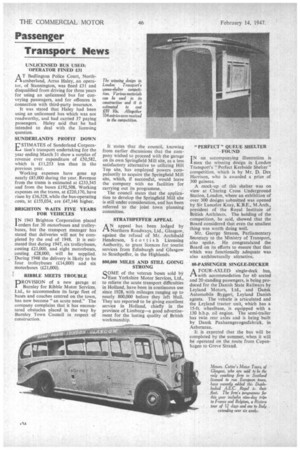 umberland, Arras Haley, an operator, of Stannington, was fined £31 and disqualified from driving for three years for using an unlicensed bus for conveying passengers, and for offences in connection with third-party insurance.

It was stated that Haley had been using an unlicensed bus which was not roadworthy, and had carried 37 paying passengers. Haley said that he had intended to deal with the licensing question.

SUNDERLAND'S PROFIT DOWN STIMATES of Sunderland Corporation's transport undertaking for the year ending March 31 show a surplus of revenue ever expenditure of £50,582, which is £11,253 less than in the previous year.

BRIGHTON WAITS FIVE YEARS FOR VEHICLES I N 1943 Brighton Corporation placed orders for 30 motorbuses and trolleybuses, but the transport manager has stated that deliveries will not be completed by the end of 1948. It is estimated that during 1947, six trolleybuses, costing £21,000, and eight motorbuses. costing £28,000, will be supplied. During 1948 the delivery is likely to be four trolleybuses (£14,000) and six motorbuses (£21,000).

RIBBLE MEETS TROUBLE DROVISION of a new garage at Burnley for Ribble Motor Services. Ltd., to accommodate its large fleet of buses and coaches centred on the town, has now become "an acute need." The company complains that it has encountered obstacles placed in the way by Burnley Town Council in respect of construction. It states that the council, knowing from earlier discussions that the company wished to proceed with the garage on its own Springfield Mill site, as a less satisfactory alternative to utilizing Hill Top site, has employed powers compulsorily to acquire the Springfield Mill site, which, if successful, would leave the company with no facilities for carrying out its programme.

The council states that the application to develop the Springfield Mill site is still under consideration, and has been referred to the joint town planning committee.

AN appeal has been lodged by Northern Roadways, Ltd., Glasgow, against the refusal of Mr. Archibald Henderson, Scot tish Licensing Authority, to grant licences for tourist services from Edinburgh and Glasgow to Strathpeffer, in the Highlands.

SOME of the veteran buses sold by East Yorkshire Motor Services, Ltd., to relieve the acute transport difficulties in Holland, have been in continuous use since 1928, with mileages ranging up to nearly 800,000 before they left Hull. They are reported to be giving excellent service in Holland, chiefly in the province of Limburg—a good advertisement for the lasting quality of British workmanship.

" PERFECT " QUEUE SHELTER FOUND TN an accompanying illustration is seen the winning design in London Transport's "Perfect Kerbside Shelter" competition. which is by Mr. D. Dex Harrison, who is awarded a prize of 300 guineas.

A mock-up of this shelter was on view at Charing Cross Underground Station, London, where an exhibition of over 300 designs submitted was opened by Sir Lancelot Keay, K.B.E., lvI.Arch., president of the Royal Institute of British Architects. The holding of the competition, he said, showed that the Board considered that even the smallest thing was worth doing well.

Mr. George Strauss, Parliamentary Secretary to the Ministry of Transport, also spoke. He congratulated the Board on its efforts to ensure that that which was functionally adequate was also architecturally attractive.

AFOUR-AXLED single-deck bus, with accommodation for 60 seated and 20 standing passengers, is being produced for the Danish State Railways by Leyland Motors, Ltd., and Dansk Automobile Byggeri, Leyland Danish agents. The vehicle is articulated and the Leyland tractor unit, which has a 15-ft, wheelbase, is equipped with a 130 b.h.p. oil engine. The semi-trailer has twin rear axles and is being built by Dansk Paahaengsvognsfabrick, in Aa bernraa.

It is expected that the bus will be completed by the summer, when it will be operated on the route from Copenhagen to Greve Strand.