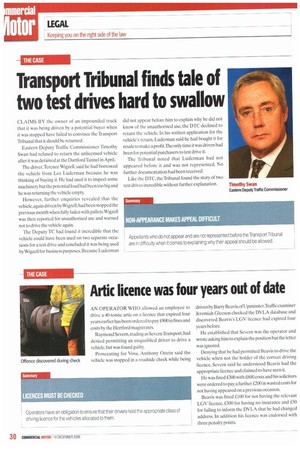 CLAIMS BY the owner of an impounded truck that it was being driven by a potential buyer when it was stopped have failed to convince the Transport Tribunal that it should be returned.

Eastern Deputy Traffic Commissioner Timothy Swan had refused to return the unlicensed vehicle after it was detained at the Dart ford Thnnel in April.

The driver, Terence Wipe11, said he had borrowed the vehicle from Lee Luderman because he was thinking of buying it. He had used it to inspect some machinery but the potential load had been too big and he was returning the vehicle empty.

However, further enquiries revealed that the vehicle,again driven by Wigzell, had been stopped the previous month when fully laden with pallets.Wigzell was then reported for unauthorised use and warned not to drive the vehicle again.

The Deputy TC had found it incredible that the vehicle could have been used on two separate occasions for a test drive and concluded it was being used by Wigzell for business purposes. Because Luderman did not appear before him to explain why he did not know of the unauthorised use, the DTC declined to return the vehicle, In his written application for the vehicle's return, Luderman said he had bought it for resale to make a profit.The only time it was driven had been for potential purchasers to test drive it.

The Tribunal noted that Luderman had not appeared before it and was not represented. No further documentation had been received.

Like the DTC, the Tribunal found the story of two test drives incredible without further explanation.