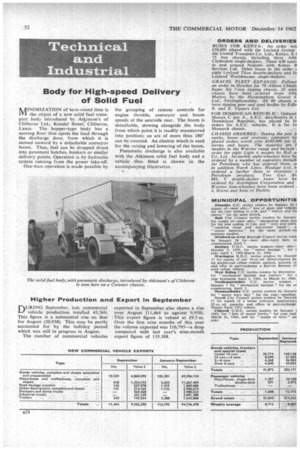 vehicle production totalled 43,560. This figure is a substantial rise on that for August (30,938). This may be partly accounted for by the holiday period which was still in progress in August.

The number of commercial vehicles

exported in September also shows a rise over August (11,464 as against 9,958). This export figure is valued at £9.5 m. Over the first nine months of this year the volume exported was 116,795-a drop compared with last year's nine-month export figure of 135,388. ORDERS AND DELIVERIES BUSES FOR KENYA: An order wai 450,000 placed with the Leyland Group the United Transport Co. Ltd., Kenya, is I 15 bus chassis, including three Albi Clydesdale single-deckers. These will open in and around Nairobi with Kenya B Services Ltd. Other buses in the order eight Leyland Titan double-deckers and fa Leyland Worldmaster single-deckers.

GRAVEL FLEET EXPANDS: Followi an order in October for 70 Albion Chieftc Super Six 7-ton tipping chassis, 10 simh chassis have been ordered from Albi. Motors by the Hoveringham Gravel C Ltd., Nottinghamshire. All 80 chassis 14 have tipping gear and steel bodies by Edit, B. and E. Tippers Ltd.

FOR DOMINICAN REPUBLIC: Quisque Motors C por A., A.E.C. distributors in t Dominican Republic, has placed its fir orders for A.E.C. vehicles. It is for fo Monarch chassis.

CHASSIS ORDERED: During the past Jr weeks, home and overseas operators ha placed orders worth over £146,000 for G. lorries and buses. The majority are I models in the Warrior range and include , order for eight Light 6 models by Hall at Co. Ltd. Invincible eight-wheelers have be ordered by a number of operators includh Jet Petroleum who has ordered three, at in addition North Lincs. Haulage Ltd. Is ordered a further three to transport J Petroleum products. Two Guy An Mk. V double-decker buses have beu ordered by Accrington Corporation and Warrior four-wheelers have been ordered I J. Harris and Sons of Dublin.

Fliatshire C.C. invites tenders by January 141 supply of-inter afia-" hire of plant and vehicles for the year ending 31.3.64, and ".vehicle and pia spares" for the same period, Bath City Council invites tenders by January for supply of-inter ana=" mechanical plant hire for the year ending 31.3.64.. and " tyres and tubes " sparking plugs and anti-freeze liquid '', a " starter batteries" for the same period-ca separate tenders.