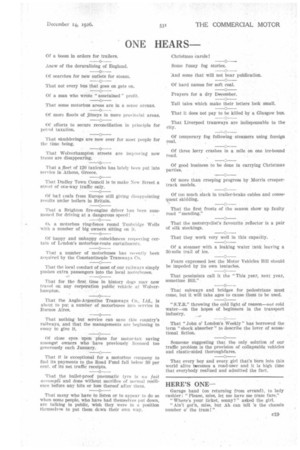 Page 43, 14th December 1926 — ONE HEARS
Close
Noticed an error?
If you've noticed an error in this article please click here to report it so we can fix it.

Of a boom in orders for trailers.

Anew of the deruralizing of England. Of searches for new outlets for steam. That not every bus that goes on gets on. Of a man who wrote "assetained" profit.

That some motorbus areas are in a sense arenas. Of more floods of jitneys in more provincial areas.

Of efforts to secure reconciliation in principle for petrol taxation.

That shudderings are now over for most people for the time being.

That Wolverhampton streets are improving now trams are disappearing.

That a,flect of 120 taxicabs has lately been pot into service in Athens, Greece.

That Dudley Town Council is to make New Street a street of one-way traffic only.

Of had coals from Europe still giving disappointing results under boilers in Britain.

That a Brighton fire-engine driver fins been summoned for driving at a dangerous speed!

Of a motorbus ring-fence round Tunbridge Wells with a number of big owners sitting on it.

That a number of motorbuses has recently been acquired by the Constantinople Tramways Co.

That the local conduct of most of our railways simply pushes extra passengers into the local motorbuses.

That for the first, time in history dogs may now travel on any corporation public vehicle at Wolverhampton, That the Anglo-Argentine Tramways Co., Ltd., Is about to put a number of ,motorbuses into service in Buenos Aires.

That nothing but service can save this country's railways, and that the managements are beginning to essay to give it.

Of close eyes upon plans for motor-tax saving amongst owners who have previously licensed too generously each January.

That it is exceptional for a motorbus company to find its payments to the Road Fund fall below 30 per cent. of its net traffic receipts.

That the bullet-proof pneumatic tyre is lin fait arrompli and done without sacrifice of normal resilience before any hits or loss thereof after them, That many who have to listen or to appear to do so when some people, who have had themselves put down, are talking in public, wish they were in a position themselves to put them dcwn their own way. Christmas carols!

And some that will not bear publication.

Of hard names for soft coal.

Prayers for a dry December.

That it does not pay to be killed by a Glasgow bus.

That Liverpool tramways are indispensable to the city.

Of three lorry crashes in a mile on one ice-bound road, Of good business to be done in carrying Christmas parties.

Of more than creeping progress by Morris creepertrack models.

Of too much slack in trailer-brake cables and consequent skidding.

That the first frosts of the season show up faulty road "mending."

That the motorcyclist's favourite reflector is a pair of silk stockings.

That they work very well in this capacity.

Of a steamer with a leaking water tank leaving a 30-mile trail of ice.

Fears expressed lest the Motor Vehicles Bill should he impeded by its own tentacles.

That pessimists call it the " This year, next year, sometime Bill."

That subways and bridges for pedestrians must come, but it will take ages to cause them to be used.

"S,T.R." throwing the cold light of reason—not cold water—on the hopes of beginners in the transport industry.

That " John o' London's Weekly" has borrowed the term "shock absorber" to describe the lover of sensational fiction.

Someone suggesting that the only solution of our traffic problem is the provision of collapsable vehicles and elastic-sided thoroughfares.

That every boy and every girl that's horn into this world alive becomes a road-user and it is high time that everybody realized and admitted the fact.