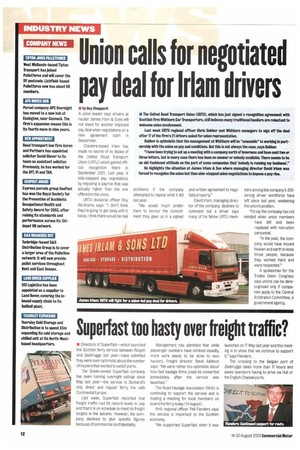 APC MOVES HUB Parcel company AK Overnight has moved to a new hub at Essington, near Cannock. The firm's expansion means this is Its fourth move in nine years.

NEW APPOINTMENT Road transport law firm Aaron and Partners has appointed solicitor David Glover to Its team as assistant solicitor. Previously, he has worked for the DfT, VI and TAN.

GEOPMST AWARD Express parcels group GeoPost has won the Royal Society for the Prevention of Accidents Occupational Health and Safety Award for 2003, after raising its standards and performance across its 134depot UK network.

/MS BRANCHES MIT Tonbridge-based SAS Distribution Group is to cover a larger area of the Palletline network: it will now provide pallet services throughout Kent and East Sussex.

UGI Logistics has been appointed as a supplier to Land Rover, covering the inbound supply chain to its Solihull plant.

YEABSLEY EXPANSION Ilearsley Cold Storage and Distribution is to spend £5m expanding its cold storage and chilled unit at its North-Westbased headquarters.