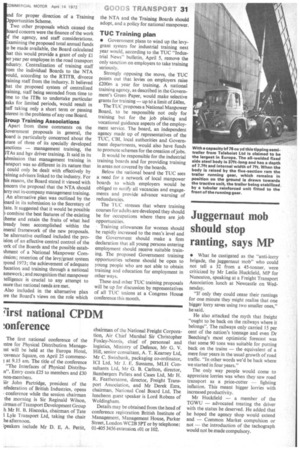 • What he castigated as the "anti-lorry brigade, the juggernaut mob" who could not tell a 32 from a 45-tonner, were criticized by Mr Leslie Huckfield, MP for Nuneaton, speaking at a Freight Transport Association lunch at Newcastle on Wednesday.

"If only they could cease their rantings for one minute they might realize that one bigger lorry saves using two smaller ones," he said.

He also attacked the myth that freight "ought to be back on the railways where it belongs". The railways only carried 15 per cent of the nation's tonnage and even Dr Beeching's most optimistic forecast was that some 90 tons was suitable for putting back on the trains — the equivalent of a mere four years in the usual growth of road traffic. "In other words we'd be back where we started in four years."

The only way people would come to appreciate lorries was when they saw road transport as a price-cutter — fighting inflation. This meant bigger lorries with increased productivity.

Mr Huckfield — a member of the TGWU — advocated treating the driver with the status he deserved. He added that he hoped the agency shop would extend and — Common Market compulsion or not — the introduction of the tachograph would not be made compulsory.