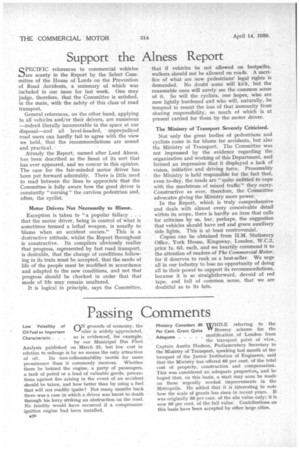 Page 30, 14th April 1939 — Support the Alness Report
Close
Noticed an error?
If you've noticed an error in this article please click here to report it so we can fix it.

SPECIFIC references to commercial vehicles are scanty in the Report by the Select Committee of the House of Lords on the Prevention of Road Accidents, a summary of which was included in our issue for last week. One may judge, therefore, that the Committee is satisfied, in the main, with the safety of this class of road transport.

General references, on the other hand, applying to all vehicles and/or their drivers, are numerous —indeed literally innumerable in the space at our disposal—and all level-headed, unprejudiced road users can hardly fail to agree with the view we hold, that the recommendations are sound and practical.

Already the Report, named after Lord Alness, has been described as the finest of its sort that has ever appeared, and we concur in this opinion. The case for the fair-minded motor driver has been put forward admirably. There is little need to read between the lines to appreciate that the Committee is fully aware how the good driver is constantly "nursing" the careless pedestrian and, often, the cyclist.

Motor Drivers Not Necessarily to Blame.

Exception is taken to "a popular fallacy . . that the motor driver, being in control of 'what is sometimes termed a lethal weapon, is usually to blame when an accident occurs." This is a destructive attitude, whilst the Report throughout is constructive. Its compilers obviously realize that progress, represented by fast road transport, is desirable, that the change of conditions following in its train must be accepted, that the mode of life of the people must be modified in accordance and adapted to the new conditions, and not that progress should be checked in order that that mode of life may remain unaltered.

It is logical in principle, says the Committee, that if vehicles be not allowed on footpaths, walkers should not be allowed on roads. A sacrifice of what are now pedestrians' legal rights is demanded. No doubt some will kick, but the reasonable ones will surely see the common sense of it. So will the cyclists, one hopes, who are now lightly burdened and who will, naturally, be tempted to resent the loss of that immunity from sharing responsibility, so much of which is at present carried for them by the motor driver.

The Ministry of Transport Severely Criticized.

Not only the great bodies of pedestrians and cyclists come in for blame for accidents, but also the Ministry of Transport_ The Committee was not impressed by the evidence regarding the organization and working of this Department, and formed an impression that it displayed a lack of vision, initiative and driving force. Presumably the Ministry is held responsible for the fact that, even to-day, the roads are "quite unfitted to cope with the maelstrom of mixed traffic" they carry. Constructive as ever, therefore, the Committee advocates giving the Ministry more power.

In the Report, which is truly comprehensive and deals with almost every conceivable detail within its scope, there is hardly an item that calls for criticism by us, bar, perhaps, the suggestion that vehicles should have red and green auxiliary side lights. This is at least controversial.

Copies can be obtained from H.M. Stationery Office, York House, Kingsway, London, W.C.2, price 1s. 6d. each, and we heartily commend it to the attention of readers of The Commercial Motor, for it deserves to rank as a best-seller. We urge all in our industry to lose no opportunity of doing all in their power to support its recommendations, because it is so straightforward, devoid of red tape, and full of common sense, that we are doubtful as to its fate.