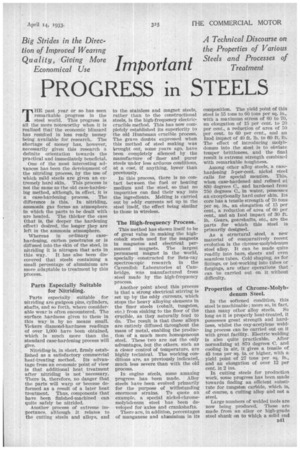 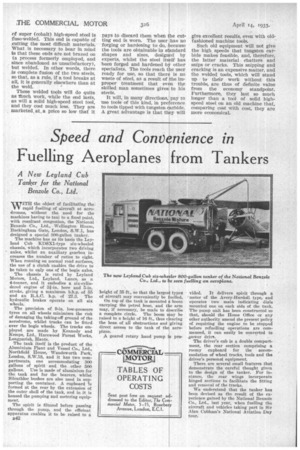 Page 55, 14th April 1933 — Important
Close
Noticed an error?
If you've noticed an error in this article please click here to report it so we can fix it.

PROGRESS in STEELS THE past year or so has seen remarkable progress in the steel world. This progress is all the more noteworthy when it is realized that the economic blizzard has resulted in less ready money being available for research. The shortage of money has, however, necessarily given this research a definite orientation towards the practical and immediately beneficial.

One of the most interesting advances has been the development of the nitriding process, by the use of which mild steels are given an extremely hard skin. This process is not the same as the old case-hardening method, although, in effect, it is a case-hardening process. The difference is this. In nitriding, ammonia gas forms an atmosphere in which the parts to be dealt with are heated. The thicker the ease (that is, the deeper the hardening effect) desired, the longer they are left in the ammonia atmosphere.

Whereas in ordinary casehardening, carbon penetrates or is diffused into the skin of the steel, in nitriding it is nitrogen that ads in

this way. It has also been discovered that steels containing a small percentage of aluminium are more adaptable to treatment by this process.

Parts especially suitable for nitriding are gudgeon pins, cylinders, shafts, and so forth, where considerable wear is often encountered. The surface hardness given to them• in this way is by no means small. Vickers diamond-hardness readings of over 1,000 have been obtained, which is much more than the standard case-hardening process will give.

Nitriding is, in short, firmly established as a satisfactory commercial heat-treating method. Its advantage from an economic point of view is that additional heat treatment after nitriding is not necessary. There is, therefore, no danger that the parts will warp or become deformed as a result of a later heat treatment. Thus, components that have been finished-machined can quite safely be nitrided.

Another process of extreme importance, although it relates to the cutting steels and alloys, and to the stainless and magnet steels, rather than to the constructional steels, is the high-frequency electriccrucible method. This has now completely established its superiority to the old Huntsman crucible process. The grave doubts expressed when this method of steel making was brought out, some years ago, have been completely silenced by the manufacture of finer and purer steels under less arduous conditions, at a cost, if anything, lqwer than previously.

In this process, there is no contact between the fuel or heating medium and the steel, so that no impurities can find their way into the ingredients. Melting is carried out by eddy currents set up in the steel itself, the effect being similar to those in wireless.

This method has shown itself to be of great value in making the highcobalt steels used for the magnets in magnetos and electrical permanent magnets. The largest permanent magnet in the world, specially constructed for Beta-ray spectroscopic research in the Cavendish Laboratories at Cambridge, was manufactured from steel made by the high-frequency process.

Another point about this process is that a strong electrical stirring is set up by the eddy .currents, which stops the heavy alloying elements in the finer steels (cobalt, tungsten, etc.) from sinking to the floor of the crucible, as they naturally tend to do. The result is that these alloys are entirely diffused throughout the mass of metal, enabling the production of a much more homogeneous steel. These two are not the only advantages, but the others, such as a closer control of temperature, are highly technical. The working conditions are, as previously indicated, much less severe than with the old process.

In engine steels, some amazing progress has been made. Alloy steels have been evolved primarily for the purpose of withstanding enormous strains. To quote an example, a special nickel-chromemolybdenum steel has been developed for axles and crankshafts.

There are, in addition, percentages of manganese and aluminium in its

composition. The yield point of this steel is 55 tons to 60 tons per sq. in., with a maximum stress of 60 to 70, an elongation of 15 per cent. to 20 per cent., a reduction of area of 50 per cent. to 60 per cent., and an Izod impact of 40 ft. lb. to 60 ft. lb. The effect of introducing molybdenum into the steel is to obviate temper brittleness, and the final result Is extreme strength combined with remarkable toughness.

Among other alloy steels, a casehardening 5-per-cent. nickel steel calls for special mention. This, when case-hardened and refined at 830 degrees C., and hardened from 750 degrees C., in water, possesses an exceptionally hard outer skin. Its core has a tensile strength of 70 tons per sq. in., an elongation of 15 per cent., a reduction of area of 60 per cent., and an Izod impact of 30 ft. lb. Gears, gearshafts, etc., are the parts for which this steel is primarily designed.

As a structural steel, a new material of comparatively recent evolution is the chrome-molybdenum steel alloy. It can be made quite readily into bars, sheets and even seamless tubes. Cold shaping, as for fittings, or hot-working into tubes or forgings, are other operations that can be carried out on it without difficulty.

In the softened condition, this steel is machinable ; more so, in fact, than many other alloy steels. So long as it is properly heat-treated, it possesses great strength and hardness, whilst the oxy-acetylene welding process can be carried out on it with great facility. Electric welding is also quite practicable. After normalizing at 870 degrees C. and cooling in air, it gives a tensile of 43 tons per sq. in. or higher, with a yield point of 27 tons per sq. In., and an elongation of over 12 per cent. in 2 ins.

In cutting steels for production work, some progress has been made towards finding an efficient substitute for tungsten carbide, which is, of course, a cutting alloy and not a steel.

Large numbers of welded tools are now being produced. These are made from an alloy or high-grade steel shank on to which a solid end of super (cobalt) high-speed steel is tuse-welded. This end is capable of gutting the most difficult materials. What is necessary to bear In mind is that these ends are not brazed on (a process formerly employed, and since abandoned as unsatisfactory), but welded. In other words, there is complete fusion of the two steels, so that, as a rule, if a tool breaks at all, it is generally elsewhere than at the weld,

These welded tools will do quite as 'Much work, while the end lasts, as will a solid high-speed steel tool, and they cost much less. They are marketed. at. .a price so low that it pays to-discard them when ting end is worn. The user forging or hardening to do, the tools are obtainable in s shapes and sizes, desig experts, whilst the steel its been forged and hardened lb specialists. The tools reach t ready for use, so that ther waste of steel, as a result of proper treatment that ev skilled man sometimes gives steels.

It will, in many directions, use tools of this kind, in pre to tools tipped with tungsten A great advantage is that t he cuthas no ecause ndard d by If has other e user is no he im/I the to his pay to erence arbide. y will give excellent results, even with oldfashioned machine tools.

Such old equipment will not give the high speeds that tungsten carbide makes feasible, and, therefore, the latter material chatters and snips or cracks. This snipping and cracking is an expensive matter, and the welded tools, which will stand up to their work without this trouble, are thus of definite value from the economy standpoint. Furthermore, they last so much longer than a tool of solid highspeed steel on an old machine that, comparing cost with cost, they are more economical,