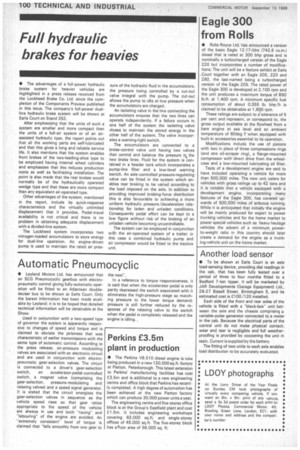 Page 102, 13th September 1968 — Full hydraulic brakes for heavies
Close
Noticed an error?
If you've noticed an error in this article please click here to report it so we can fix it.

After emphasizing that the units of such a system are smaller and more compact than the units of a full-air system or of an airassisted hydraulic type, the report points out that all the working parts are self-lubricated and that this gives a long and reliable service life. It also mentions that the system enables front brakes of the two-leading-shoe type to be employed having internal wheel cylinders and emphasizes that this reduces production costs as well as facilitating installation. The point is also made that the rear brakes would normally be of the hydraulically operated wedge type and that these are more compact than any equivalent air-operated type.

Other advantages of the system, mentioned in the report, include its quick-response characteristics and the virtually unlimited displacement that it provides. Pedal-travel availability is not critical and there is no problem in obtaining adequate displacement with a divided-line system.

The Lockheed system incorporates two nitrogen-loaded accumulators to store energy for dual-line operation. An engine-driven pump is used to maintain the rated air pres sure of the hydraulic fluid in the accumulators, the pressure being controlled by a cut-out valve integral with the pump. The cut-out allows the pump to idle at low pressure when the accumulators are charged.

The accumulators are connected to a brake-control valve unit having two valves that control and balance the pressure ir. the two brake lines. Fluid for the system is contained in a header tank which incorporates a pump-line filter and a low-level warning switch. An axle-controlled pressure-regulating valve can be fitted in the system which enables rear braking to be varied according to the load imposed on the axle. In addition to providing improved braking-force distribution this is also favourable to achieving a more uniform hydraulic pressure /deceleration relationship for laden and unladen conditions. Consequently pedal effort can be kept to a low figure without risk of the braking of an unladen vehicle becoming uncontrollable.

The system can be employed in conjunction with the air-operated system of a trailer; in this case a combined hydraulic pump and air compressor would be fitted to the tractive