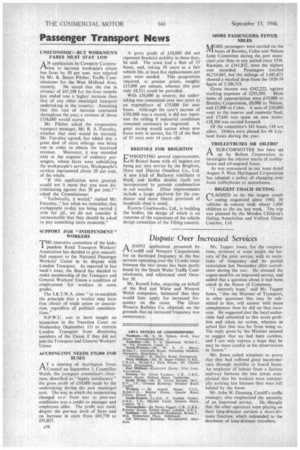 Page 38, 13th September 1946 — Passenger Transport News
Close
Noticed an error?
If you've noticed an error in this article please click here to report it so we can fix it.
Keywords : Bus, Trolleybus, Business / Finance

recently. He stated that the rise in menu:of £47,198 for the four months just ended was a higher increase than that of any other municipal transport undertaking in the country. Assuming that this rate of increase continued throughout the year, a revenue of about £136,000 would accrue, • Mr. Pitcher asked the corporation transport manager, Mr. R. A. Fearnley, whether that sum would be attained. Mr. Fearnley agreed, but added that a great deal of extra mileage was being run in order to obtain the increased revenue. Moreover, it was recorded only at the expense of ordinary passengers, whose fares were subsidizing the workpeople's services. Workpeople's services represented about 20 per cent. of the whole.

"If this application were granted. would not it mean" that you were discriminating against that 20 per cent.? " asked the Commissioner.

"Technically, it would," replied Mr. Fearnley, :' but when we remember that workpeople to-day are being carried it mile for id., we do not consider it unreasonable that they should be asked to pay something more economic." A gross profit of £10,000 did not represent financial stability in these days, he said. The town had a fleet of 53 buses, and, taking 10 years as a fair vehicle life, at least five replacements per year were needed. This programme required, at present prices, roughly £15,000 per annum, whereas this year only £8,311 could be provided.

With £56,000 in reserve, the undertaking was committed over two years to an expenditure of £75,000 for new buses. Although the year's income of £101,000 was a record, it did not represent the ceiling if industrial conditions remained stationary br improved. A great saving would accrue when new buses were in service, for 32 of the fleet of 55 were over 14 years old.

BRISTOLS FOR BRIGHTON EM BODYING several improvements, 10 Bristol buses with oil engines are being put into service. by the Brighton, Hove and District Omnibus Co., Ltd. A new kind of Beclawat ventilator is fitted, and Isoflex double roofs are incorporated to prevent condensation in wet weather. Other improvements include a larger platform for the conductor and more liberal provision of handrails than is usual.

Eastern Coachworks, Ltd., is building the bodies, the design of which is an outcome of the experience of the vehicle design committee of the Tilling concern. MORE PASSENGERS: FEWER MILES

Of the committee's 143 buses, 118 are oilers. Orders were placed for 46 Leyland buses during the year.

SUB-COMMITTEE has been set up by Bolton Corporation to investigate the relative merits of trolleybuses and oil-engined buses, As was announced in our issue dated August 9, West Hartlepool Corporation has adopted a policy of changing over from trolleybuses to motorbuses.

BIGGEST COACH OUTING rLAIMED to be the largest coach %.--• outing organized since 1940, 30 vehicles in convoy took about 1,000 children to the sea last week. The trip was planned by the Morden Children's Outing Association and Valliant Direct Coaches, Ltd.