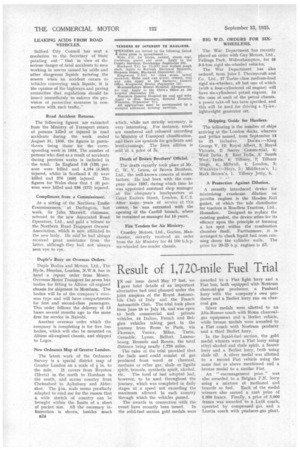 Page 34, 13th September 1935 — Result of 1,720-mile Fuel Trial
Close
Noticed an error?
If you've noticed an error in this article please click here to report it so we can fix it.

I N our issue dated May 17 last, we gave brief details of an important alternative fuel trial planned under the joint auspices of the Royal Automobile Club of Italy and the French Automobile Club. The trial took place from June 25 to July 16, and was open to both commercial and private vehicles, 44 Italian, French and Belgian vehicles taking part in the journey from Rome to Paris, via Florence, Venice, Milan, Turin, Grenoble, Lyons, Belfort, Luxembourg, Brussels and Rouen, the total distance being nearly 1,720 miles.

The rules of the trial provided that the fuels used could consist of gas produced from wood or charcoal, methane or other gas, shale or lignite spirit, benzole, synthetic spirit, alcohol, etc. The forril of fuel adopted had, however, to be used throughout the journey, which was completed in daily stages at a speed not exceeding the maximum allowed in each country through which the vehicles passed.

The awards in connection with the event have recently been issued. In the solid-fuel section gold medals were awarded to a Fiat light lorry and a Fiat bus, both equipped with Nostrum charcoal-gas producers, a Panhard lorry with the company's own producer and a Berliet lorry run on charcoal gas.

Silver medals were allotted to an Alfa-Romeo coach with Roma charcoalgas equipment and a Berliet vehicle, while bronze medals were awarded to a Fiat coach with Nostrum producer and a third Berliet lorry.

In the liquid-fuel section, the gold medal winners were a Fiat lorry using ethyl alcohol and shale spirit, a Saurer lorry and a Berliet lorry, both using shale oil. A silver medal was allotted to a second Fiat vehicle using the same fuel as above mentioned and a bronze medal to a similar Fiat.

An "encouragement prize " was also awarded to a Belgian F.N. lorry using a mixture of methanol and

benzole as fuel. Each of the medal winners also earned a cash prize of 5,000 francs. Finally, a prize of 3,000 francs was awarded to a Latil coach, operated by compressed gas, and a Lancia coach with producer-gas plant.