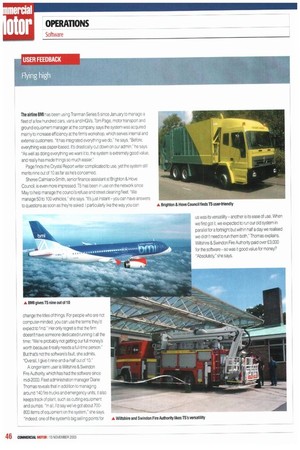 Page 46, 13th November 2003 — The airline WI na.s been using Tranman Series 5 since
Close
Noticed an error?
If you've noticed an error in this article please click here to report it so we can fix it.
Keywords : Unitary Authorities Of England, Brighton And Hove, Swindon, Wiltshire, Local Education Authority, Hove

January to manage a fleet of a few hundred cars, vans and HGVs. Tom Page, motor transport and ground equipmert manager at the company. says the system was acquired mainly to increase efficiency at the firm's workshop, Mich serves internal and external customers. "It has integrated everything we do," he says. "Before. everything was paper-based. It's drastically cut down on our admin," he says. "As well as doing everything we want it to, the system is extremely good value, and realty has made things so much easier."

Page finds the Crystal Report writer complicated to use. yet the system still merits nine out of 10 as far as he's concerned.

Sheree Calmiano-Smith, senior finance assistant at Brighton & Hove Council, is even more impressed. T5 has been in use on the network since May to help manage the council's refuse and street cleaning fleet. "We manage 50 to 100 vehicles," she says. "It's just instant-you can have answers

to questions as soon as they're asked. I particularly like the way you can A Brighton & Hove Council finds 15 user-friendly

change the titles of things. For people who are not computer-minded, you can use the terms they'd expect to f ind." Her only regret is that the firm doesn't have someone dedicated running it all the time: "We're probably not getting our full money's worth because it really needs a full-time person." But that's not the software's fault, she admits. "Overall, I give it nine-and-a-half out of 10."

A longer-term user is Wiltshire & Swindon Fire Authority which has had the software since mid-2000. Fleet administration manager Diane Thomas reveals that in addition to managing around 140f ire trucks and emergency units, it also keeps track of plant, such as cutting equipment and pumps. "In all, I'd say we've got about 700800 items of equipment On the system," she says.

"Indeed, one of the system's big selling points for A Wiltshire and Swindon Fire Authority likes T5's versatility

us was its versatility another is its ease of use. When we first got it, we expected to run our old system in parallel for a fortnight but within half a day we realised we didn't need to run them both," Thomas explains. Wiltshire & Swindon Fire Authority paid over £3,000 for the software so was it good value for money? "Absolutely," she says.