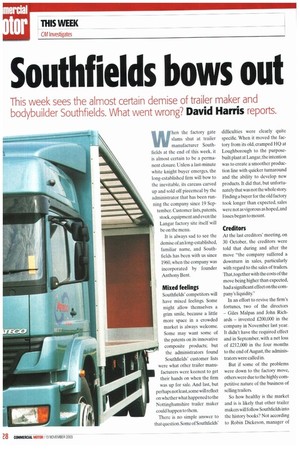 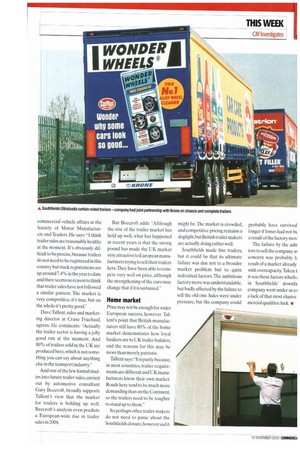 Page 28, 13th November 2003 — Southfields bows out
Close
Noticed an error?
If you've noticed an error in this article please click here to report it so we can fix it.
Keywords : Recreational Vehicles, London Borough Of Wandsworth, Southfields, Film Trailer, Trailer, Business / Finance

When the factory gate slams shut at trailer manufacturer Southfields at the end of this week, it is almost certain to be a permanent closure. Unless a last-minute white knight buyer emerges, the long-established firm will bow to the inevitable, its carcass carved up and sold off piecemeal by the administrator that has been running the company since 19 September. Customer lists, patents, stock,equipment and even the L,angar factory site itself will be on the menu.

It is always sad to see the demise of an long-established, familiar name, and Southfields has been with us since 1960, when the company was incorporated by founder Anthony Bent.

Southfields' competitors will have mixed feelings. Some might allow themselves a grim smile, because a little more space in a crowded market is always welcome. Some may want some of the patents on its innovative composite products; but the administrators found Southfields' customer lists were what other trailer manu facturers were keenest to get their hands on when the firm was up for sale. And last, but perhaps not least,some will reflect on whether what happened to the Nottinghamshire trailer maker could happen to them.

There is no simple answer to that question.Some of Southfields' difficulties were clearly quite specific. When it moved the factory from its old, cramped HQ at Loughborough to the purposebuilt plant at Langar, the intention was to create a smoother production line with quicker turnaround and the ability to develop new products. It did that, but unfortunately that was not the whole story. Finding a buyer for the old factory took longer than expected, sales were not as vigorous as hoped,and losses began to mount.

At the last creditors' meeting, on 30 October, the creditors were told that during and after the move "the company suffered a downturn in sales, particularly with regard to the sales of trailers. That,together with the costs of the move being higher than expected, had a significant effect on the company's liquidity."

In an effort to revive the firm's fortunes, two of the directors — Giles Malpas and John Richards — invested £200,000 in the company in November last year. It didn't have the required effect and in September, with a net loss of £212,000 in the four months to the end of August, the administrators were called in.

But if some of the problems were down to the factory move, others were due to the highly competitive nature of the business of selling trailers So how healthy is the market and is is likely that other trailer makers will follow Southfields into the history books? Not according to Robin Dickeson, manager of commercial vehicle affairs at the Society of Motor Manufacturers and Traders. He says: 1 think trailer sales are reasonably healthy at the moment. It's obviously difficult lobe precise, because trailers do not need to be registered in this country but truck registrations are up around 7.4°/a in the year to date and there seems no reason to think that trailer sales have not followed a similar pattern. The market is very competitive, it's true, but on the whole it's pretty good.

Dave Tallent, sales and marketing director at Crane Fruehauf. agrees. He comments: "Actually the trailer sector is having a jolly good run at the moment. And 80% of trailers sold in the UK are produced here, which is not something you can say about anything else in the transport industry."

And one of the few formal studies into future trailer sales. carried out by automotive consultant Gary Beecroft. broadly supports Tallent's view that the market for trailers is holding up well. Beecroft's analysis even predicts a European-wide rise in trailer sales in 2004. But Beecroft adds: -Although the size of the trailer market has held up well, what has happened in recent years is that the strong pound has made the UK market very attractive to European manufacturers trying to sell their trailers here:They have been able to compete very well on price, although the strengthening of the euro may change that if it is sustained."

Home market Price may not be enough for wider European success, however. Tallent's point that British manufacturers still have 80% of the home market demonstrates how loyal hauliers are to UK trailer builders. and the reasons for this may be more than merely patriotic.

Tallent says:"It is partly because. in most countries, trailer requirements are different and UK manufacturers know their own market. Roads here tend to be much more demanding than on the Continent. so the trailers need to be tougher to stand up to them.

So perhaps other trailer makers do not need to panic about the SoutWields dosure,however sad it might be. the market is crowded, and competitive pricing remains a dogfight,but British trailer makers are actually doing rather well.

Southfields made fine trailers, but it could be that its ultimate failure was due not to a broader market problem but to quite individual factors. The ambitious factory move was understandable, but badly affected by the failure to sell the old one. Sales were under pressure, but the company could probably have survived longer if losses had not be a result of the factory mov The failure by the adn tors to sell the company as concern was probably Ir result of a market already with overcapacity. Taken t it was these factors which' in Southfields' downfa company went under as a i a lack of that most elusive mercial qualities: luck. •