Politicians have to eat their words 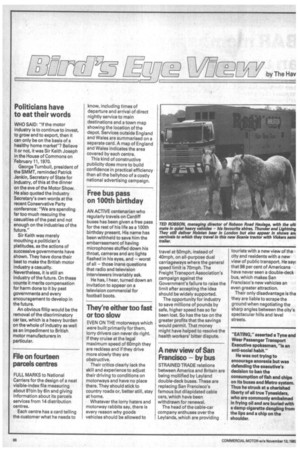 WHO SAID: "If the motor industry is to continue to invest, to grow and to export, then it can only be on the basis of a healthy home market"? Believe it or not, it was Sir Keith Joseph in the House of Commons on February 11, 1970.

George Turnbull, president of the SMMT, reminded Patrick Jenkin, Secretary of State for Industry, of this at the dinner on the eve of the Motor Show. He also quoted the Industry Secretary's own words at the recent Conservative Party conference: "We are spending far too much rescuing the casualties of the past and not enough on the industries of the future."

Sir Keith was merely mouthing a politician's platitudes, as the actions of successive governments have shown. They have done their best to make the British motor industry a casualty. Nevertheless, it is still an industry of the future. On these counts it merits compensation for harm done to it by past governments and every encouragement to develop in the future.

An obvious fillip would be the removal of the discriminatory car tax, which is a heavy burden on the whole of industry as well as an impediment to British motor manufacturers in particular.