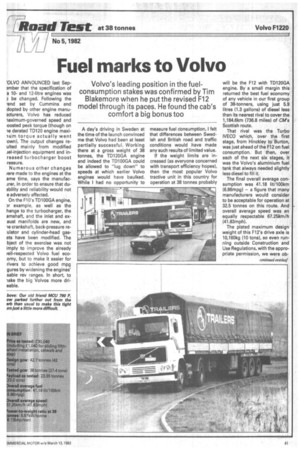 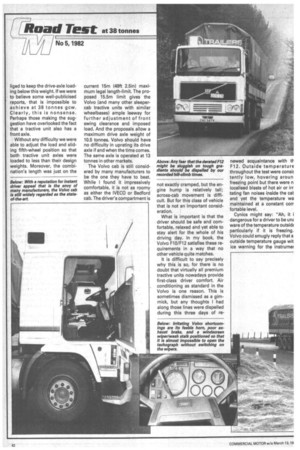 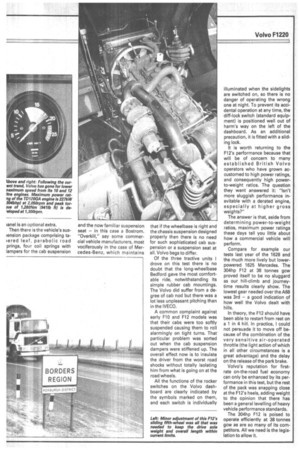 Volvo's leading position in the fuelconsumption stakes was confirmed by Tim Blakemore when he put the revised F12 model through its paces. He found the cab's comfort a big bonus too

'OLVO ANNOUNCED last Sepember that the specification of

10and 12-litre engines was 3 be changed. Following the rend set by Cummins and dopted by other engine menu3cturers, Volvo has reduced laximum-governed speed and ioosted peak torque (though on

Numerous other changes 'fere made to the engines at the ame time, says the manufacJrer, in order to ensure that duability and reliability would not e adversely affected.

On the Fl O's TD1000A engine, )r example, as well as the hange to the turbocharger, the amshaft, and the inlet and exaust manifolds are new, and le crankshaft, back-pressure reulator and cylinder-head gasets have been modified. The bject of the exercise was. not imply to improve the already fell-respected Volvo fuel ecoomy, but to make it easier for rivers to achieve good mpg gures by widening the engines' sable rev ranges. In short, to -lake the big Volvos more drisable.

A day's driving in Sweden at the time of the launch convinced me that Volvo had been at least partially successful. Working there at a gross weight of 38 tonnes, the TD120GA engine and indeed the TD100GA could be allowed to "lug down" to speeds at which earlier Volvo engines would have baulked. While I had no opportunity to measure fuel consumption, I felt that differences between Swedish and British road and traffic conditions would have made any such results of limited value.

If the weight limits are increased (as everyone concerned with transport efficiency hopes), then the most popular Volvo tractive unit in this country for operation at 38 tonnes probably will be the F12 with TD120GA engine. By a small margin this returned the best fuel economy of any vehicle in our first group of 38-tonners, using just 5.9 litres (1.3 gallons) of diesel less than its nearest rival to cover the 1,184.6km (736.8 miles) of CNN Scottish route.

That rival was the Turbo IVECO which, over the first stage, from Hinckley to Burton, was just ahead of the F12 on fuel consumption. But then, over each of the next six stages, it was the Volvo's aluminium fuel tank that always needed slightly less diesel to fill it.

The final overall average consumption was 4118 lit/100km (6.86mpg) — a figure that many manufacturers would consider to be acceptable for operation at 32.6 tonnes on this route. And overall average speed was an equally respectable 67.25km/h (41.83mph).

The plated maximum design weight of this F12's drive axle is 10,160kg (10 tons), so even running outside Construction and Use Regulations, with the appropriate permission, we were ob liged to keep the drive-axle loading below this weight. If we were to believe some well-publicised reports, that is impossible to achieve at 38 tonnes gcw. Clearly, this is nonsense. Perhaps those making the suggestion have overlooked the fact that a tractive unit also has a front axle.

Without any difficulty we were able to adjust the load and sliding fifth-wheel position so that both tractive unit axles were loaded to less than their design weights. Moreover, the combination's length was just on the current 15m (49ft 2.5in) maximum legal length-limit. The proposed 15.5m limit gives the Volvo (and many other sleepercab tractive units with similar wheelbases) ample leeway for further adjustment of front swing clearance and imposed load. And the proposals allow a maximum drive axle weight of 10.5 tonnes. Volvo should have no difficulty in uprating its drive axle if and when the time comes. The same axle is operated at 13 tonnes in other markets.

The Volvo cab is still considered by many manufacturers to be the one they have to beat. While I found it impressively comfortable, it is not as roomy as either the IVECO or Bedford cab. The driver's compartment is

not exactly cramped, but the engine hump is relatively tall; across-cab movement is difficult. But for this class of vehicle that is not an important consideration.

What is important is that the driver should be safe and comfortable, relaxed and yet able to stay alert for the whole of his driving day. In my book, the Volvo F10/F12 satisfies these requirements in a way that no other vehicle quite matches.

It is difficult to say precisely why this is so, for there is no doubt that virtually all premium tractive units nowadays provide first-class driver comfort. Air conditioning as standard in the Volvo is one reason. This is sometimes dismissed as a gimmick, but any thoughts I had along those lines were dispelled during this three days of re newed acquaintance with if F12. Outside temperature throughout the test were consiE tently low, hovering aroun freezing point but there were n localised blasts of hot air or irr tating fan noises inside the cat and yet the temperature wa maintained at a constant corr fortable level.

Cynics might say: "Ah, it i dangerous for a driver to be uni ware of the temperature outsich particularly if it is freezing. Volvo could smugly reply that a outside temperature gauge wit ice warning for the instrumei panel is an optional extra.

Then there is the vehicle's suspension package comprising tapered leaf, parabolic road prings, four coil springs with lampers for the cab suspension and the now familiar suspension seat — in this case a Bostrom. "Overkill," say some commercial vehicle manufacturers, most vociferously in the case of Mercedes-Benz, which maintains that if the wheelbase is right and the chassis suspension designed properly then there is no need for such sophisticated cab suspension or a suspension seat at all, Volvo begs to differ.

Of the three tractive units I drove on this test there is no doubt that the long-wheelbase Bedford gave the most comfortable ride, notwithstanding its simple rubber cab mountings. The Volvo did suffer from a degree of cab nod but there was a lot less unpleasant pitching than in the IVECO.

A common complaint against early F10 and F12 models was that their cabs were too softly suspended causing them to roll alarmingly on tight turns. That particular problem was sorted out when the cab suspension dampers were stiffened up. The overall effect now is to insulate the driver from the worst road shocks without totally isolating him from what is going on at the road wheels.

All the functions of the rocker switches on the Volvo dashboard are clearly indicated by the symbols marked on them, and each switch is individually illuminated when the sidelights are switched on, so there is no danger of operating the wrong one at night. To prevent its accidental operation at any time, the diff-lock switch (standard equipment) is positioned well out of harm's way on the left of the dashboard. As an additional precaution, it is fitted with a sliding lock.

It is worth returning to the F12's performance because that will be of concern to many established British Volvo operators who have grown accustomed to high power ratings, and consequently high powerto-weight ratios. The question they want answered it: "Isn't more sluggish performance inevitable with a derated engine, especially at higher gross weights?"

The answer is that, aside from determining power-to-weight ratios, maximum power ratings these days tell you little about how a commercial vehicle will perform.

Compare for example our tests last year of the 1628 and the much more lively but lowerpowered 1625 Mercedes. The 304hp F12 at 38 tonnes gcw proved itself to be no sluggard as our hill-climb and journeytime results clearly show. The lowest gear needed over the A68 was 3rd — a good indication of how well the Volvo dealt with hills.

In theory, the F12 should have been able to restart from rest on a 1 in 4 hill. In practice, I could not persuade it to move off because of the combination of the very sensitive air-operated throttle (the light action of which in all other circumstances is a great advantage) and the delay on the release of the park brake.

Volvo's reputation for firstrate on-the-road fuel economy can only be enhanced by its performance in this test, but the rest of the pack was snapping close at the F12's heels, adding weight to the opinion that there has been a general levelling of heavy vehicle performance standards.

The 304hp F12 is poised to operate efficiently at 38 tonnes gcw as are so many of its competitors. All we need is the legislation to allow it.