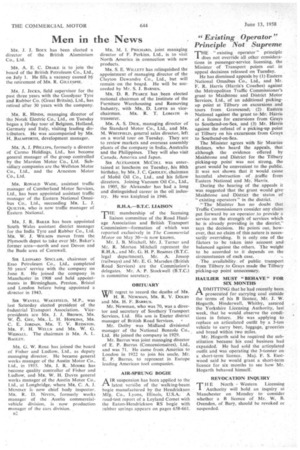 Page 36, 13th June 1958 — "Existing Operator " Principle Not Supreme
Close
Noticed an error?
If you've noticed an error in this article please click here to report it so we can fix it.
Keywords :

THE 'existing operator" principle does not override all other considerations in passenger-service licensing, the Minister of Transport points out in appeal decisions released on Tuesday.

He has dismissed appeals by (1) Eastern National Omnibus Co., Ltd., and Mr. F. R. Harris (Harris's Coaches) against the Metropolitan Traffic Commissioner's grant to Maidstone and District Motor Services, Ltd., of an additional pickingup point at Tilbury on excursions and tours from Gravesend; (2) Eastern National against the grant to ,Mr. Harris of a licence for excursions from Grays to Southend-on-Sea, and (3) Mr. Harris against the refusal of a picking-up point at Tilbury on his excursions from Grays to Southend-on-Sea.

The Minister agrees with Sir Maurice Holmes, who heard the appeals, that although the evidence offered by Maidstone and District for the Tilbury picking-up point was not strong, the grant would be convenient to the public. It was not shown that it would cause harmful abstraction of Jraffic from Eastern National and Mr. Harris.

During the hearing of the appeals it was suggested that the grant would giveMaidstone and District the status of "existingoperators" in the district.

"The Minister has no doubt that Traffic Commissioners consider any claim put forward by an operator ,to provide a service on the strength of services which he is already providing in the district," says the decision. He points out, however, that no claim of this nature is necessarily overriding. It is only one of the factors to be taken into account and balanced against the others. The weight to be accorded to it depends on the circumstances of each case.

The availability of public transport from Tilbury to Grays made the Tilbury picking-up point unnecessary.

HAULIER MUST " BEHAVE " FOR SIX MONTHS

A DMITTING that he had recently been n. prosecuted for carrying coal outside the terms of his B licence, Mr. J. W. Hogarth, Hinderwell, Whitby, assured the Yorkshire Licensing Authority, last week, that he would observe the conditions in future. ,He was applying to replace an articulated outfit by a 3-ton vehicle to carry beer, luggage, groceries and bread within two miles.

Mr. .Hogarth said he required the substitution because his coal business had expanded. He had sold the articulated outfit and was' operating the 3-tanner On a short-term licence. Maj. F. S. Eastwood said he would grant a short-term licence for six months to see how Mr. Hogarth behaved himself.

TH E North Western Licensing I Authority will hold an inquiry at Manchester on Monday to consider whether a B licence of Mr. W. B. Ovenden, of Bury, should be revoked or suspended.