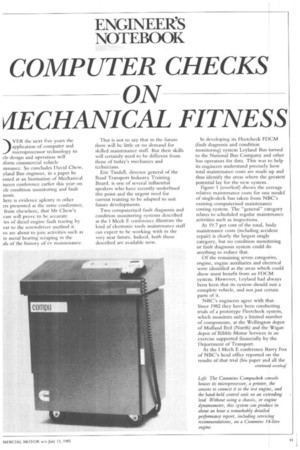 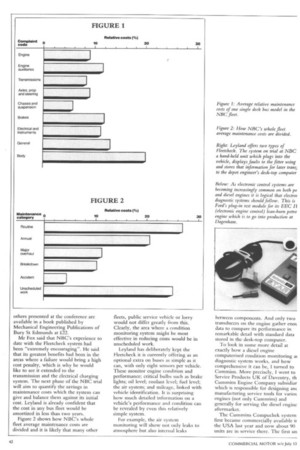 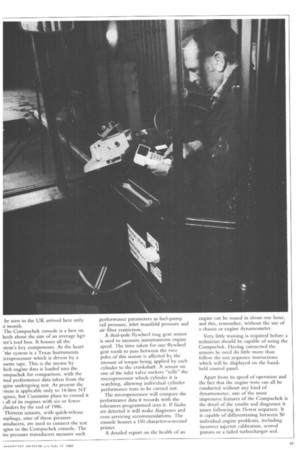 ;form commercial vehicle itenance. So concludes David Chew, yland Bus engineer, in a paper he entcd at an Institution of Mechanical incers conference earlier this year on de condition monitoring and fault nosis.

here is evidence aplenty in other ',.rs presented at the same conference, from elsewhere, that Mr Chew's .cast will prove to be accurate. ies of diesel engine fault tracing by ear to the screwdriver method it ns are about to join activities such as te metal bearing scraping in the als of the history of cv maintenance. That is not to say that in the future there will be little or no demand for skilled maintenance staff. But their skills will certainly need to he different from those of today's mechanics and technicians.

Eric Tindall, director general of the Road Transport Industry Training Board, is one of several influential speakers who have recently underlined this point and the urgent need for current training to be adapted to suit future developments.

Two computerised fault diagnosis and condition monitoring systems described at the I Mech E conference illustrate the kind of electronic tools maintenance staff can expect to be working with in the very near future. Indeed, both those described are available now. In developing its Fleetcheck FDCM (fault diagnosis and condition monitoring) system Leyland Bus turned to the National Bus Company and other bus operators for data. This was to help its engineers understand precisely how total maintenance costs are made up and thus identify the areas where the greatest potential lay for the new system.

At 19.7 per cent of the total, body maintenance costs (including accident repair) is clearly the largest single category, but no condition monitoring or fault diagnosis system could do anything to reduce that.

Of the remaining seven categories, engine, engine auxiliaries and electrical were identified as the areas which could show most benefit from an FDCM system. However, Leyland had always been keen that its system should suit a complete vehicle, and not just certain parts of it.

NBC's engineers agree with that. Since 1982 they have been conducting trials of a prototype Fleetcheck system, which monitors only a limited number of components, at the Wellington depot of Midland Red (North) and the Wigan depot of Ribble Motor Services in an exercise supported financially by the Department of Transport.

At the I Mech E conference Barry Fox of NBC's head office reported on the results of that trial (his paper and all the others presented at the conference are available in a book published by Mechanical Engineering Publications of Bury St Edmunds at £22.

Mr Fox said that NBC's experience to date with the Fleetcheck system had been "extremely encouraging". He said that its greatest benefits had been in the areas where a failure would bring a high cost penalty, which is why he would like to see it extended to the transmission and the electrical charging system. The next phase of the NBC trial will aim to quantify the savings in maintenance costs which the system can give and balance them against its initial cost. Leyland is already confident that the cost in any bus fleet would be amortized in less than two years.

Figure 2 shows how NBC's whole fleet average maintenance costs are divided and it is likely that many other fleets, public service vehicle or lorry would not differ greatly from this. Clearly, the area where a condition monitoring system might be most effective in reducing costs would be in unscheduled work.

Leyland has deliberately kept the Fleetcheck it is currently offering as an optional extra on buses as simple as it can, with only eight sensors per vehicle. These monitor engine condition and performance; critical bulbs such as brake lights; oil level; coolant level; fuel level; the air system; and mileage, linked with vehicle identification. It is surprising how much detailed information on a vehicle's performance and condition can be revealed by even this relatively simple system.

For example, the air system monitoring will show not only leaks to atmosphere but also internal leaks between components. And only two transducers on the engine gather enoi data to compare its performance in remarkable detail with standard data stored in the desk-top computer.

To look in some more detail at exactly how a diesel engine computerised condition monitoring al diagnostic system works, and how comprehensive it can be, I turned to Cummins. More precisely, I went to Service Products UK of Daventry, th Cummins Engine Company subsidiar which is responsible for designing an manufacturing service tools for variot engines (not only Cummins) and generally for serving the diesel engine aftermarket.

The Cummins Compuchek system first became commercially available ir the USA last year and now about 90 units arc in service there. The first un be seen in the UK arrived here only ;t month.

The Compuchek console is a box on heels about the size of an average hgv ter's tool box. It houses all the stem's key components. At the heart 'the system is a Texas Instruments icroprocessor which is driven by a ssette tape. This is the means by hich engine data is loaded into the ompuchek for comparison, with the :tual performance data taken from the igine undergoing test. At present the /stem is applicable only to 14-litre NT igines, but Cummins plans to extend it ) all of its engines with six or fewer ,rlinders by the end of 1986.

Thirteen sensors, with quick-release )uplings, nine of them pressure ansducers, are used to connect the test igine to the Compuchek console. The ine pressure transducers measure such performance parameters as fuel-pump rail pressure, inlet manifold pressure and air filter restriction.

A dual-pole flywheel ring gear sensor is used to measure instantaneous engine speed. The time taken for one flywheel gear tooth to pass between the two poles of this sensor is affected by the amount of torque being applied by each cylinder to the crankshaft. A sensor on one of the inlet valve rockers "tells" the microprocessor which cylinder it is watching, allowing individual cylinder performance tests to be carried out.

The microprocessor will compare the performance data it records with the tolerances programmed into it. If faults are detected it will make diagnoses and even servicing recommendations. The console houses a 150 character-a-second printer.

A detailed report on the health of an engine can be issued in about one hour, and this, remember, without the use of a chassis or engine dynaniometer.

Very little training is required before a technician should be capable of using the Compuchek. Having connected the sensors he need do little more than follow the test sequence instructions which will be displayed on the handheld control panel.

Apart from its speed of operation and the fact that the engine tests can all be conducted without any kind of dynamometer, one of the most impressive features Of the Compuchek is the detail of the results and diagnoses it issues following its 15-test sequence. It is capable of differentiating between 50 individual engine problems, including incorrect injector calibration, scored pistons or a failed turbocharger seal.