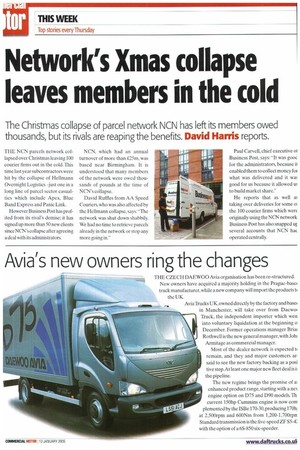 Page 12, 13th January 2005 — Network's Xmas collapse leaves members in the cold
Close
Noticed an error?
If you've noticed an error in this article please click here to report it so we can fix it.
Keywords : Courier, Business / Finance

The Christmas collapse of parcel network NCN has left its members owed thousands, but its rivals are reaping the benefits. David Harris reports.

THE NCN parcels network collapsed over Christmas leaving 100 courier firms out in the cold. This time last year subcontractors were hit by the collapse of Hellmann Overnight Logistics —just one in a long line of parcel sector casualties which include Apex, Blue Band Express and Panic Link.

However Business Post has profited from its rival's demise; it has signed up more than 50 new clients since NCN's collapse after agreeing a deal with its administrators. NCN, which had an annual turnover of more than £25m, was based near Birmingham. It is understood that many members of the network were owed thousands of pounds at the time of NCN's collapse.

David Ruffles from AA Speed Couriers, who was also affected by the Hellmann collapse, says: "The network was shut down shabbily. We had no time to retrieve parcels already in the network or stop any more going in." Paul Carvell, chief executive cd Business Post, says: "It was gooC for the administrators, because id enabled them to collect money foi what was delivered and it ww good for us because it allowed tu to build market share."

He reports that as well w taking over deliveries for some 01 the 100 courier firms which wen originally using the NCN network Business Post has also snapped ur several accounts that NCN hac operated centrally.