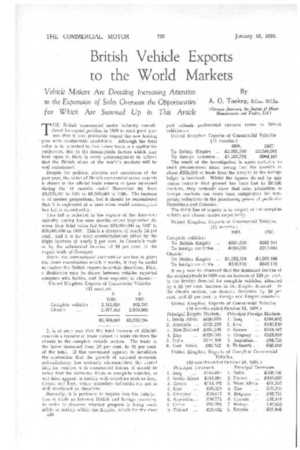 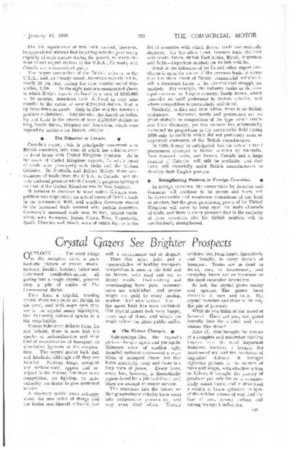 Page 68, 13th January 1939 — British Vehicle Exports to the World Markets
Close
Noticed an error?
If you've noticed an error in this article please click here to report it so we can fix it.

Vehicle Makers Are Devoting increasing Attention to the Expansion of Sales Overseas the Opportunities for Which Are Summed up in This Article THE British commercial motor industry consolidated its export position in 1938 to such good purpose that it may justifiably regard the new trading year with considerable confidence. Although the total value to be attached to this future trade is a matter for conjecture, due to the innumerable factors which may hear upon it, there is every encouragement to believe that the British share of the world's markets will be well maintained.

Despite the political alarams and excursions of the past year, the value of British commercial motor exports is shown in the official trade returns to have increased during the 11 months ended November 30, from £3,559,784 in 1937 to £3,589,061 in 1938. The increase is of modest proportions, but it should be remembered that it is registered at a time when• world consumption has fallen considerably.

This fall is reflected in the exports of the American industry during the nine months ended September 30, when their total value fell from $73,000,000 in 1937 to $56,000,000 in 1938. This is a decrease of nearly 23 per cent., and it is far trom counterbalanced either by the slight increase of nearly 5 per cent, in Canada's trade or by the substantial increase of 16 per cent. in the export trade of Germany.

Before the international competitive position is given the closer examination which it merits, it may be useful to analyse the British exports in certain directions. First, a distinction may be drawn between vehicles exported complete with bodies, and those exported as chassis:United Kingdom Exports of Commercial Vehicles (11 months).

It is at once seen that the total increase of £30,000 conceals a transfer of trade valued at £500,000 from the chassis to the complete vehicle section. The trade in the latter increased from 28 per cent. to 42 per cent. of the total. If this movement appears to invalidate the contention that the growth of national economic self-sufficiency has seriously circumscribed the export field for vehicles with commercial bodies, it should be noted that the increased trade in complete vehicles, as will later appear, is mainly with countries such as Iraq, Greece and Iran, where secondary industries are not so well developed as elsewhere.

'Secondly, it is pertinent to inquire into the distribution of trade as between British and foreign countries, in order to discover whether progress is being made solely or mainly within the Empire, which for the most

• To foreign countries... £1,235,561 £964,197 The result of the investigation is again contrary one's preconceived ideas, seeing that the transfer of about £250,000 of trade from the Empire to the foreign ledger is involved. Whilst the figures do not by any means indicate that ground has beenlost in British markets, they certainly show that sales promotion in foreign markets can more than compensate for temporary reductions in the purchasing power of particular Dominions and Colonies.

The third line of inquiry is in respect of the complete vehicle and chassis trades respectively.

United Kingdom Exports of Commercial Vehicles. (11 months.) It may now be observed that the dominant feature of the overseas trade in 1938 was an increase of 119 per cent. in the foreign demand for complete vehicles, attended by a 23 per cent. increase in the Empire demand. In the chassis section, the demand decreased by 16 per cent. and 23 per cent. in foreign and Empire countries.

United Kingdom Exports of Commercial Vehicles. (10 months ended October 31, 1938.) The full significance of this table cannot, however, be appreciated without first inquiring into the purchasing capacity of each market during the period, to which the most recent export returns of the U.S.A., Germany and Canada are a convenient guide.

The largest competitor of the British industry is the U.S.A., and, as already noted, American exports fell by nearly 23 per cent. during the nine months ended Sep tember, 1938. In the eight markets enumerated above to which British exports declined by a total of £640,000 in 10 months, American trade declined in only nine months to the extent of over 9,259,0(X) dollars, that is by three times as much Only in Eire was the American position maintained. Additionally, the American industry lost trade to the extent of over 3,250,000 dollars in Iraq, South Africa, Uruguay and Argentina, which were expanding markets for British vehicles.

• The Situation in Canada. • 'Canada's export trade is principally concerned with British countries, into most of which her vehicles enter on level terms with United Kingdom products. As in the cases of United Kingdom exports, Canada's losses of trade were principally with India and the African Colonies. In Australia and British Malaya there were transfers of trade from the U.S.A. to Canada, and the Only material point at which Canada's progress infringed on that of the United Kingdom was in New Zealand.

It remains to discover to what extent• German competition was responsible for actual losses of British trade in the commercial field, and whether Germany shared in the increased trade secured with certain countries. Germany's increased trade was, in fact, almost exclusively with Rumania, Japan, China, Peru, Yugoslavia, Spain, Uruguay and Brazil, none of which figures in the list of countries with which British trade was seriously depleted. On the other hand, German trade declined with South Africa, British East Africa, Brazil, Argentina and India—important markets for British vehicles.

Great as the influence of tariffs and other export conditions is upon the course of the overseas trade, it seems that the sheer merit of British commercial vehicles is still a dominant factor in the international struggle for markets. For example, the industry ranks as its, principal customer an Empire country, South Africa, which concedes no tariff preference to British vehicles, and where competition is particularly unfettered.

Similarly, in Eire and East Africa, there is no British

preference. Moreover, tariffs and preferences are no great obstacle to competition of the type which emanates from Germany, yet this menace has substantially increased its proportions in the commercial field during 71938 only in markets which did not preViously rank as important customers of the British manufacturer.

In 1939, it may be, anticipated that the valuable tariff preferences accorded to British vehicles by Australia, New Zealand, India, and Burma, Canada and a large number of Colonies, will still be available, and that these will materially assist British manufacturers to develop their Empire position.

In foreign countries, the competition by America and 'Germany will continue to be severe and there will be innumerable and wearisome restrictions of one kind or another, but the great purchasing power of the United Kingdom will serve to keep open the main channels of trade, and there is every prospect that in the majority of these countries also the British position will be meritoriously strengthened,