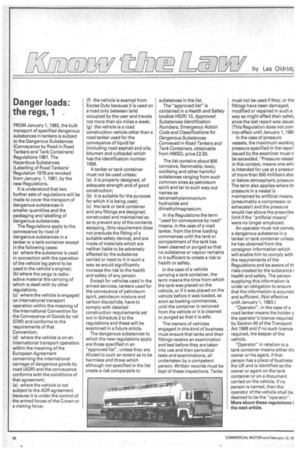 Page 34, 13th February 1982 — Danger loads: the regs, 1
Close
Noticed an error?
If you've noticed an error in this article please click here to report it so we can fix it.

The Regulations apply to the conveyance by road of dangerous substances in a tanker or a tank container except in the following cases: (a) where the substance is used in connection with the operation of the vehicle (eg petrol to be used in the vehicle's engine); (b) where the cargo is radioactive material the carrying of which is dealt with by other regulations; (c) where the vehicle is engaged on international transport operation within the meaning of the International Convention for the Conveyance of Goods by rail (CIM) and conforms to the requirements of that Convention; (d) where the vehicle is on an international transport operation within the meaning of the European Agreement concerning the international carriage of dangerous goods by road (ADR) and the conveyance conforms with the conditions of that agreement; (e) where the vehicle is not subject to the ADR agreement because it is under the control of the armed forces of the Crown or a visiting force; (f) the vehicle is exempt from Excise Duty because it is used on a road only between land occupied by the user and travels not more than six miles a xiveek; (g) the vehicle is a road construction vehicle other than a road tanker used for the conveyance of liquid tar (including road asphalt and oils, bitumen and cutbacks) which has the identification number 1999.

A tanker or tank container must not be used unless: (a) it is properly designed, of adequate strength and of good construction; (b) it is suitable for the purpose for which it is being used; (c) the tank or tank container and any fittings are designed, constructed and maintained so as to prevent any of the contents escaping, (this requirement does not preclude the fitting of a suitable safety device), and are made of materials which are neither liable to be adversely affected by the substance carried or react to it in such a way as would significantly increase the risk to the health and safety of any person.

Except for vehicles used in the armed services, tankers used for the conveyance of petroleum spirit, petroleum mixture and carbon disulphide, have to comply with detailed construction requirements set out in Schedule 2 to the regulations and these will be examined in a future article.

The dangerous substances to which the new regulations apply are those specified in an "approved list", unless they are diluted to such an extent as to be harmless and those which although not specified in the list create a risk comparable to substances in the list.

The list contains about 800 corrosive, flammable, toxic, oxidising and other harmful substances ranging from such common ones as petroleum spirit and tar to such way-out names as tetramethylammonium hydroxide and dimethylmagnesium.

In the Regulations the term "used for conveyance by road" means, in the case of a road tanker, from the time loading commences until the tank or compartment of the tank has been cleaned or purged so that no substance or vapour remains in it sufficient to create a risk to health or safety.

The owners of vehicles engaged in this kind of business must ensure that tanks and their fittings receive an examination and test before they are taken into use and then periodical tests and examinations, all undertaken by a competent person. Written records must be kept of these inspections. Tanks must not be used if they, or the fittings have been damaged, modified or repaired in such a way as might affect their safety since the last report was issue( (This Regulation does not corn into effect until January 1, 198i In the case of pressure vessels, the maximum workinc pressure specified in the repor issued by the examiner must n be exceeded. "Pressure vessel in this context, means one whil is intended for use at a pressur of more than 500 millibars abo or below atmospheric pressure The term also applies where th pressure in a vessel is maintained by artificial means (presumably a compressor or exhauster) and the pressure would rise above the prescribe limit if the "artificial means" were no longer employed.

An operator must not convey a dangerous substance in a tanker or tank container unless he has obtained from the consignor information which will enable him to comply with the requirements of the Regulations and be aware of th risks created by the substance 1 health and safety. The person supplying this information is under an obligation to ensure that the information is accurate and sufficient. (Not effective until January 1,1983.) "Operator", in the case of a road tanker means the holder a the operator's licence required by Section 60 of the Transport Act 1968 and if no such licence required, the keeper of the vehicle.

"Operator" in relation to a tank container means either the owner or his agent, if that person has a place of business the UK and is identified as the owner or agent on the tank container or on a document carried on the vehicle. If no person is named, then the operator of the vehicle shall be deemed to be the "operator". More about these regulations i the next article.