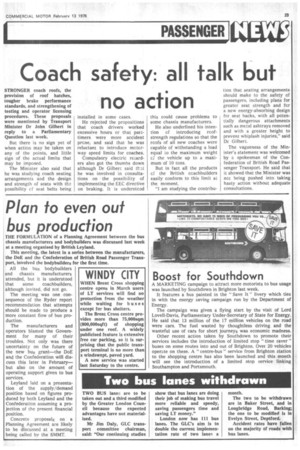 Page 25, 13th February 1976 — Boost for Southdown
Close
Noticed an error?
If you've noticed an error in this article please click here to report it so we can fix it.
Keywords : Transport In East Sussex, Southdown, Brighton, Bus, Southdown Motor Services, Business / Finance

A MARKETING campaign to attract more motorists to bus usage was launched by Southdown in Brighton last week.

It features a bus painted in the " Save It" livery which ties in with the energy saving campaign run by the Department of Energy.

The campaign was given a flying start by the visit of Lord Lovell-Davis, Parliamentary Under-Secretary of State for Energy. He said that 13 million of the 17 million vehicles on the road were cars. The fuel wasted by thoughtless driving and the wasteful use of cars for short journeys was economic madness.

Other recent action taken by Southdown to promote their services includes the introduction of limited stop "time saver" buses on some routes into and out of Brighton. Over 20 vehicles operate on these. A " centre-bus " service from Brighton station to the shopping centre has also been launched and this month will see the introduction of a limited stop service linking Southampton and Portsmouth.