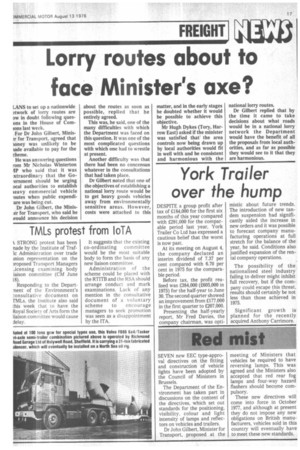 Page 19, 13th August 1976 — Lorry routes about to face Minister's axe?
Close
Noticed an error?
If you've noticed an error in this article please click here to report it so we can fix it.
Keywords : Outes, Lorry, Truck, Health / Medical / Pharma

LANS to set up a nationwide etwork of lorry routes are DW in doubt following quesons in the House of Coinions last week.

For Dr John Gilbert, Minis!i* for Transport, agreed that ioney was unlikely to be lade available to pay for the theme.

He was answering questions rom Mr Nicholas Winterton 4P who said that it was .xtraordinary that the Gorernment should be urging ocal authorities to establish wavy commercial vehicle .outes when public expendiure was being cut.

Dr John Gilbert, the Minis-.er for Transport, who said he ivould announce his decision about the routes as soon as possible, replied that he entirely agreed.

This was, he said, one of the many difficulties with which the Department was faced on this question. It was one of the most complicated questions with which one had to wrestle at present.

Another difficulty was that there had been no concensus whatever in the consultations that had taken place.

Dr Gilbert noted that one of the objectives of establishing a national lorry route would be to get heavy goods vehicles away from environmentally sensitive areas. However, costs were attached to this matter, and in the early stages he doubted whether it would be possible to achieve this objective.

Mr Hugh Dykes (Tory, Harrow East) asked if the minister was satisfied that the area controls now being drawn up by local authorities would fit in well with and be consistent and harmonious with the national lorry routes.

Dr Gilbert replied that by the time it came to take decisions about what roads would be in a national lorry network the Department would have the benefit of all the proposals from local authorities, and as far as possible they would see to it that they are harmonious.