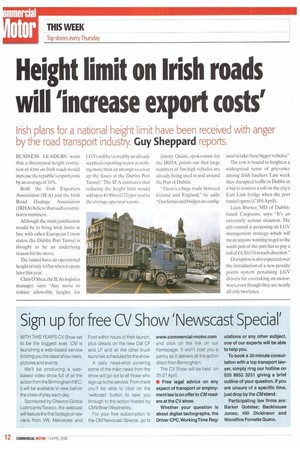 Irish plans for a national height limit have been received with anger by the road transport industry. Guy Sheppard reports.

BUSINESS LEADERS warn that a threatened height restriction of 4.6m on Irish roads would increase the republic's export costs by an average of 10%.

Although the main justification would be to bring Irish limits in line with other European Union states, the Dublin Port Tunnel is thought to be an underlying reason for the move.

The tunnel have an operational height of only 4.65m when it opens later this year.

Chris O'Shea, the lEA's logistics manager, says: -Any move to reduce allowable heights for LGVs will he viewed by an already sceptical exporting sector as nothing more than an attempt to cover up the fiasco at the Dublin Port Tunnel.The LEA estimates that reducing the height limit would add up to El 90m (£132) per year to the average operator's costs. Jimmy Quinn, spokesman for the IRHA, points out that large numbers of 5m-high vehicles are already being used in and around the Port of Dublin.

"There's a huge trade between Ireland and England," he adds. "Our ferries and bridges are config ured to take these bigger vehicles."

The row is bound to heighten a widespread sense of grievance among Irish hauliers. Last week they disrupted traffic in Dublin in a bid to remove a toll on the city's East Link bridge when the port tunnel opens (CM 6 April ).

Liam Brewer, MD of Dublinbased Cargocare, says: "It's an extremely serious situation. The city council is proposing an LGV management strategy which will mean anyone wanting to get to the south part of the port has to pay a toll of €4.30 (f3) in each direction."

Disruption is also expected over the introduction of a new penalty points system penalising LGV drivers for overtaking on motorways, even though they arc nearly all only two lanes.