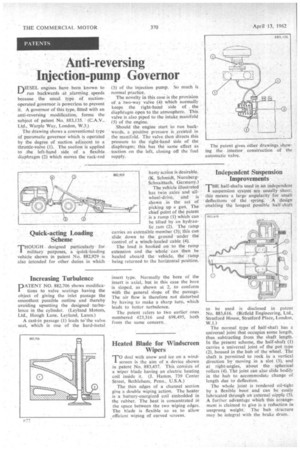 Page 80, 13th April 1962 — Anti-reversing Injection-pump Governor
Close
Noticed an error?
If you've noticed an error in this article please click here to report it so we can fix it.

DIESEL engines have been known to run backwards at alarming speeds because the usual type of suctionoperated governor is powerless to prevent it. A governor of this type, fitted with an anti-reversing modification, forms the subject of patent No. 883,135. (C.A.V., Ltd., Warple Way, London, W.3.)

The drawing shows a conventional type of pneumatic governor, which is operated by the degree of suction adjacent to a throttle-valve (I). The suction is applied to •The left-hand side of a flexible diaphragm (2) which moves the rack-rod

THOUGH designed particularly for 1 military purposes, a quick-loading vehicle shown in patent No. 882,929 is also intended for other duties in which

PATENT NO. 882,706 shows modifications to valve seatings having the object of giving the inlet passage the smoothest possible outline and thereby avoiding upsetting the designed turbulence in the cylinder. (Leyland Motors, Ltd., Hough Lane, Leyland, Lancs.)

A cast-in passage (1) leads tolhe valve seat, which is one of the hard-metal (3) of the injection pump. So much is normal practice.

The novelty in this case is the provision of a two-way valve (4) which normally keeps the right-hand side of the diaphragm open to the atmosphere. This valve is also piped to the intake manifold (5) of the engine.

Should the engine start to run backwards, a positive pressure is created in the manifold, The valve then directs this pressure to the right-hand side of the diaphragm; this has the same effect as suction on the left, closing off the fuel supply.

hasty action is desirable. (K. Schmidt, NurnbergSchnaittach, Germany.) The vehicle illustrated has twin axles and allwheel-drive, and is shown in the act of picking up a gun. The chief point of the patent is a ramp (I) which can be tilted by an hydrau lic ram (2). The ramp carries an extensible member (3); this can slide down to the ground under the Control of a winch-hauled cable (4).

The load is hooked on to the ramp extension and the whole can then be hauled aboard the vehicle, the ramp being returned to the horizontal position.

insert type. Normally the bore of the insert is axial, but in this case the bore is sloped, as shown at 2, to conform with the general slope of the passage. The air flow is therefore not disturbed by having to make a sharp turn, which leads to better turbulence.

TO deal with snow and ice on a wind screen is the aim of a device shown in patent No. 883,437. This consists of a wiper blade having an electric heating coil inside it. (J. Hamm. 739 Center Street, Bethlehem, Penn., U.S.A.) The thin edges of a channel section give a double wiping action. The heater is a battery-energized coil embedded in the rubber. The heat is concentrated in the space between the two wiping edges. The blade is flexible so as to allow efficient wiping of curved screens.

Thalf-shafts used in an independent suspension system are usually short: this means a large angularity for small deflections of the spring. A design enabling the longest possible half-shaft

o be used is disclosed in patent No. 883,616. (Birfield Engineering, Ltd., Stratford House, Stratford Place, London, W.1.) The normal type of half-shaft has a universal joint that occupies some length, thus subtracting from the shaft length. In the present scheme, the half-shaft (I) carries a universal joint of the pot type (2), housed in the hub of the wheel. The shaft is permitted to rock in a vertical direction by moving in a slot (3), and at right-angles, about the spherical rollers (4). The joint can also slide bodily in the hub to accommodate change of length due to deflection.

The whole joint is rendered oil-tight by a flexible hoot and can be easily lubricated through an external nipple (5). A further advantage which this arrangement is claimed to give is a reduction in unsprung weight. The hub structure may be integral with the brake drum.