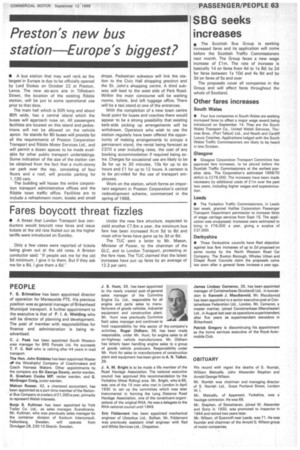 Page 65, 12th September 1969 — PEOPLE
Close
Noticed an error?
If you've noticed an error in this article please click here to report it so we can fix it.
Keywords : Cummins, Trucking Industry In The United States, Road Haulage Association, Transport, Mechanical Engineering, Manufacturing

F. S. Brimelow has been appointed director of operation for Merseyside PTE. His previous position was as general manager of Birkenhead Municipal transport. A further appointment to the executive is that of P. I. A. Welding who will be director of planning and development. The post of member with responsibilities for finance and administration is being readvertised.

Melvyn Rosser, 47, a chartered accountant, has been appointed as a part-time member of the National Bus Company at a salary of E1,000 a year. prima MY to represent Welsh interests.

B orje S. Kullman has been appointed by York Trailer Co. Ltd., as sales manager. Scandinavia. Mr. Kullman, who was previously sales manager for the container division of Kockum Interconsult Falkenberg, Sweden, will operate from Ornvagen 28, 230 10 Skandr, Sweden.

J. B. Hunt. 39. has been appointed to the newly created post of general sales manager of the Cummins Engine Co. Ltd., responsible for all engine and parts sales to manufacturers of goods vehicles, industrial equipment and construction plant. Mr. Hunt was previously Cummins field sales manager and continues to hold responsibility for this sector of the company's activities. Roger Oldham, 36. has been made responsible, under Mr. Hunt, for engine sales to all on-highway vehicle manufacturers. Mr. Oldham has latterly been handling engine sales to a group of goods vehicle producers. Responsibility under Mr. Hunt for sales to manufacturers of construction plant and equipment has been given to A. N. Talbot, 39,

J. A. M. Bright is to be made a life member of the Road Haulage Association. The national executive council has approved this recommendation by the Yorkshire (West Riding) area. Mr. Bright, who is 85, was one of the 15 men who met in London in April 1930 to set op the committee which was later instrumental in forming the Long Distance Road Haulage Association, one of the constituent organizations of the original RHA. He was a delegate to the R HA national council until 1949.

Patrick Gregory is discontinuing his appointment as the home services executive of the Royal Automobile Club,

Mr. Stephen, of Stonehaven. joined W. Alexander and Sons in 1930, was promoted to inspector in 1944 and retired Iwo years later.

Mr. Wilson, of Scarcroh near Leeds. was 71. He was founder and chairman of the Arnold G. Wilson group of motor companies.