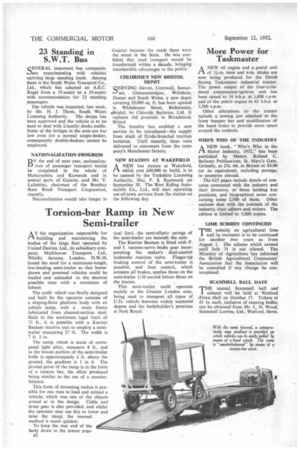 Page 36, 12th September 1952 — Torsion-bar Ramp in New
Close
Noticed an error?
If you've noticed an error in this article please click here to report it so we can fix it.

A S the organization responsible for il building and maintaining the bodies of the large fleet operated by United Dairies, Ltd., its subsidiary company, Mickleover Transport, Ltd., Whitby Avenue, London, N.W.10, found the need for a maximum-length, low-loading semi-trailer so that horsedrawn and powered vehicles could be loaded and unloaded in the shortest possible time with a minimum of labour.

The outfit which was finally designed and built by the operator consists of a sloping-floor platform body with an inbuilt ramp, with a main frame fabricated from channel-section steel. Built to the maximum legal limit of 33 ft.. it is possible with a Karrier Bantam tractive unit to employ a semitrailer measuring 27 ft. The width is 7 ft. 3 in.

The ramp, which is made of corrugated light alloy, measures 8 ft., and as the lowest portion of the semi-trailer body is approximately 2 ft. above the ground, the gradient is 1 in 4. The pivotal point of the ramp is in the form of a torsion bar, the effect produced being similar to the use of a counterbalance.

This form of mounting makes it possible for one man to load and unload a vehicle, which was one of the objects aimed at in the design. Cable and drum gear is also provided, and whilst the operator may use this to lower and raise the ramp, the manual method is much quicker. To keep the rear end of the body down to the lowest prac82 tical limit, the semi-elliptic springs of the semi-trailer are beneath the axle.

The Karrier Bantam is fitted with F. and J. vacuum-servo brake gear incorporating the maker's dual-control hydraulic reaction valve. Finger-tip braking control of the semi-trailer is possible, and foot control, which actuates all brakes, applies those on the semi-trailer 1/10 second before those on the tractor.

This semi-trailer outfit operates mainly in the Greater London area being used to transport all types of U.D. vehicle between widely scattered depots and the bodybuilder's premises at Park Royal.