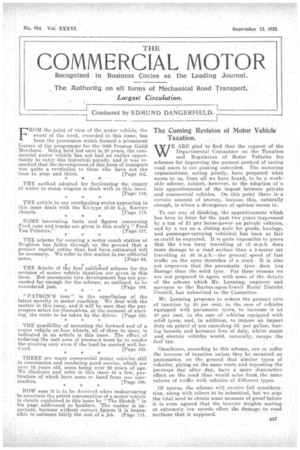 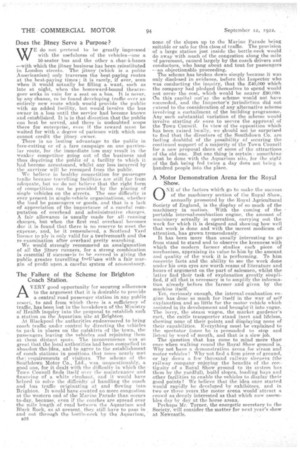 E ARE glad to -find that the request of the Departmental -Committee on the Taxation and Regulation of Motor Vehicles for schemes .for improving the present method of taxing road user's is not passing unheeded. The motoring organizations, acting jointly, have preparedwhat seems to us, from all we have heard, to be a workable scheme, subject, however, to the adoption of a fair apportionment of the impost between private and cornmercial vehicles. On this point there isa certain amount of secrecy, because this, naturally enough, is where a divergence of opinion-comes in.

To our way of thinking, the apportionment which has been in .force for the past two years (expressed by a tax of £1 per horse-pourer' on private vehicles, and by a tax on a sliding scale for goods, haulage, and passenger-carrying vehicles) has been as fair as could be expected. It is quite impossible to prove that the 4-ton lorry travelling at 12 m.p.h. does more damage to a road surface than a 5-seater car travelling at 40 m.p.h.—the general speed of fast traffic en the open Stretches of a read. It is also yet unproven that. the pneumatic tyre does less damage than the solid -tyre. For these reasons we are not prepared to agree with some .of the details of the scheme which Mr. Leeming, engineer and surveyor to the Barton-upon-Irwell Rural District Council, has submitted to the Committee.

Omnibuses, according to this .scheme, are to suffer the increase of taxation unless they be mounted on pneumatics, on the ground that similar types of vehicles, plying on the same route and repeating the journeys day after day, have a more destructive effect on the road than would arise from the same volume of traffic with vehicles of different types.

Of course, the scheme will receive full consideration, along with others to be submitted, but we urge the vital need to obtain some measure of proof before it is even agreed that the heavier Weights -moving at extremely low sneeds effect the damage-to road surfaces that is supposed. ,

THE COMMERCIAL MOTOR Does the. Jitney Serve a Purpose?

WE do not pretend to be greatly impressed with the usefulness of the vellielesone a • 50-seater bus and the other a char-a-banes —with which the jitney business has been reinstituted in London streets. .'llie jitney (which is a polite Americanism) only traverses the best-paying routes at the best-paying times ; it is rarely, if ever, seen When it would actaally be filling a want,. such as late at night, when -the homeward-bound theatregoer seeks.in vain for a seat on a bus, it is never, by any chance, to be found developing traffic over an entirely new route which would provide the public with an added facility, but would involve the bus owner in a loss until the service had become known and established. It is in that direction that the public can best be served, and there is undoubted scope there for enterprise, even if the reward must be waited for with a degree of patience with which one cannot credit the jitney owner.

There is no lasting advantage to the public in fare-cutting or of a fare campaign on one particular route, for the immediate loss may result in the weaker competitor going out of the business and thus depriving the public of a facility to which it had become accustomed, whilst any loss incurred by the survivor will be recouped from the public.

We believe in healthy competition for passenger traffic because travelling facilities are still far horn adequate, but we do not believe that the right form of competition can be provided by the placing of single vehicles on the streets. The one difficulty is ever present in single-vehicle organizations, whether the load be passengers or goods, and that, is a lack of appreciation of the importance of a, careful computation of overhead and administrative charges. A fair allowance isusually made for all running charges, but when the first real overhaul becomes due it is found that there is no reserve to meet the expense, and, be it remembered, a Scotland Yard licence to ply is only valid for a twelvemonth and the re-examination after overhaul pretty searching.

We would strongly recommend an amalgamation of all the jitney runners, for a strong combination is essential if soccesseis tobe earned in giving the public greater travelling faelratFs with a fair margin of profit upon, a careful system of accounta-ncy.

The Failure of the Scheme for Brighton Coach Station.

AVERY good opportunity for securing adherence to the argument that it is desirable to provide a central road passenger station in any public resort, to and from which there is a sufficiency of traffic, has been lost in thebreakdown of the Ministry of Health inquiry into the proposal to establish such a Station on the Aquarium site at Brighton.

At Blackpool the authorities endeavoured to bring coach traffic 'older control by directing the vehicles to paik in places on the outskirts of the' town, the passengers leaving the vehicles and rejoining them at these distant spots. The. inconvenience was so great that the local authorities had been compelled to abandon theidea, and to agree to the establishment of coach stations in positions that more nearly met the requirements of visitors. The scheme of the Southdown Motor Co., Ltd., was. unquestionably, a good one, for it dealt with the difficulty in which the Town Council finds itself over the maintenance and financing of a white elephant, and it would have helped to solve the difficulty of handling the coach and bus traffic originating at and flowing into Brighton. It would have created no more congestion at the western end of the Marine Parade than occurs to-day, because, even if the coaches are spread over the mile length of road between the Aquarium and Black Rock, as at siresent. they still 'have to pass in and out through the bottle-neck by the Aquarium, el6 none of the slopes up to the Marine Parade being suitable or safe for this class of traffic. The provision of a large Station just inside the bottle sleek would. do away with much of the congestion along the mile of pavement, caused largely by the-coach drivers and conductors, who hang about and tout for passengers —an objectionable proceeding.

The scheme has broken down simply because it was only disclosed in evidence, before the Inspector who was conducting the inquiry, that the 240,000 which the company had pledged themselves to spend would not -cover the cost, which would be nearer £90.000. On this capital out'ay the scheme would not have succeeded, and the Inspector's jurisdiction did not extend to the consideration of any alternative scheme involving a curtailment of the building programme. Any such substantial variation of the scheme would involve starting de vovo to secure the approval of the Town Council. in view of the opposition which has been raised locally, we should not be surprised to find that the directors of the Southdown Co. are feeling doubtful of the possibility of securing the continued support of a majority of the Town Council for a new proposal shorn of some of the attractions_ of the old one. But one thing is certain: something must be done with the Aquarium site, for the sighSt of the fish being fed twice a day does not bring a hundred people into the place.

A Motor Demonstration Arena for the Royal Show.

NE of the factors which go to make the success of the machinery section ofthe Royal Show,

annually promoted by the Royal Agricultural Society of England, is the display of so much of the machinery in motion. With the coming of the portable internal-combustion engine, the amount of machinery actually in operation, carrying out the work for which it is designed and showing how well that work is done and with the merest modicum of attention, has grown tremendously.

It has been more than usually interesting to go from stand to stand and to-observe the keenness with which the modern farmer studies each piece of Mechanism, appraising its value to him by the amount and quality of the work it is performing. To him concrete facts and the ability to see the work done under his own eyes are worth reams of literature and hours of argument on the part of salesmen, whilst the latter find their task of explanation greatly sinaplifled, if all that is necessary' is to amplify the information already before the farmer and given by the machine itself.

Yet, curiously enough, the internal-combustion engine has done so much for itself in the way of self explanation and so little for the motor vehicle which assisted in its development and broughtwit into vogue. The lorry, the steam wagon, the market gardener's cart, the cattle transporter stand inert and lifeless, showing none of their_points and displaying none of their capabilities. Everything must be explained to the spectator (oncehe is persuaded to stop and listen) by word of mouth, and that is a slow job.

The question that has come to mind more than once when walking round the Royal Show ground is, Why not have a demonstration arena for steam and motor vehicles I Why not find a firm piece of ground, or laY down a few thousand railway sleepers (the railway company enjoying the benefits of the con ' tiguity of a Royal Show ground to its system has them by the yardful), build slopes. loading bays and other facilities to enable the vehicles to display their good points? We believe that the idea once started would rapidly he developed by exhibitors, and in two or three years the motor arena. would attracta crowd as deeply interested as that which now assembles day Ire clay at the horse arena. Perhaps Mr. Turner, the energetic secretary to the Society, will consider the matter for next year's show at Newcastle.