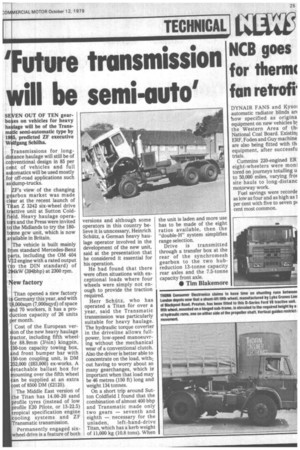 Page 27, 12th October 1979 — 'Future transmission ill be semi-auto'
Close
Noticed an error?
If you've noticed an error in this article please click here to report it so we can fix it.
Keywords : Measurement, Vehicles, Titan, Ton, Axle, Transport, Trucks, Technology

ransmissions for longdi4tance haulage will still be of co ventional design in 85 per ceint of vehicles and full a omatics will be used mostly fo off-road applications such as ump-trucks.

F's view of the changing g arbox market was made cl ar at the recent launch of T. an Z 3242 six-wheel drive tr ctive unit at Sutton Coldfi Id. Heavy haulage opera t s and the Press were invited t the Midlands to try the 180ti ne gcw unit, which is now a ailable in Britain.

The vehicle is built mainly m standard Mercedes-Benz rts, including the OM 404 2 engine with a rated output o the DIN standard) of 2 kW (394bhp) at 2300 rpm.

Permanently engaged sixwheel drive is a feature of both versions and although some operators in this country believe it is unncessary, Heinrich Schutz, a German heavy haulage operator involved in the development of the new unit, said at the presentation that he considered it essential for his operation.

He had found that there were often situations with exceptional loads where four wheels were simply not enough to provide the traction required.

Herr Schtitz, who has operated a Titan for over a year, said the Transmatic transmission was particularly suitable for heavy haulage. The hydraulic torque coverter in the driveline allows fullpower, low-speed manoeuvring without the mechanical wear of a conventional clutch. Also the driver is better able to concentrate on the load, with.: out having to worry about so many gearchanges, which is important when that load may be 46 metres (150 ft) long and weight 134 tonnes.

On a short trip around Sutton Coldfield I found that the combination of almost 400 bhp and Transmatic made only two gears — seventh and eighth — necessary for the unladen, left-hand-drive Titan, which has a kerb weight of 11,000 kg (10.8 tons). When the unit is laden and more use has to be made of the eight ratios available, then the "double-H" system simplifies range selection. Drive is transmitted through a transfer box at the rear of the synchromesh gearbox to the two hubreduction 13-tonne capacity rear axles and the 7.5-tonne capacity front axle.