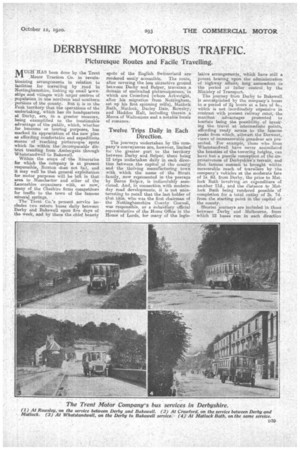 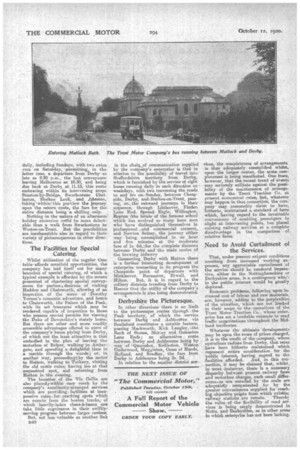 MUCH` HAS been done by the Trent

.Motor Traction Co. in revolutionising arrangements in relation to facilities for travelling by road in Nottinghamshire,' linking up small townships and villages with larger centres of population in the northern and southern portions of the county. But it, is in the Peak territory that the operations of the undertaking, which has its headquarters at Derby, are, in a greater measure, being exemplified to the inestimable advantage of the public, which, whether for business or touring purposes, has marked its appreciation. of the new plan as affording comfortable and expeditions means of reaching picturesque Spots which lie within the ancomparable district trending from Ambergate through Whatstandwell to Bakewell.

Within the scope of the itineraxios for which the company is at present responsible, Buxton dose not fail, and it may well be that general exploitation for motor purposes will he left in that area to Manchester and other of the Lancashire organizers with, as now, many of the Cheshire firms competitors for traffic to the town of the famous mineral springs. . The TrentCo.'s present service includes two return buses daily between Derby and Bakewell upon five days of the week, and by these the chief beauty spots of the English Switzerland are rendered easily accessible. The route, after covering the les§ attractive ground between Derby and Belper, traverses a domain of unrivalled picturesqueness, in which are Cromford (where Arkwright, after his migration from Nottingham, set up his first spinning mills), Matlock Bath, Matlock, Dailey Dale, Rowsley, and Haddon Hall, including therein a Mecca of Waltonians and a notable locale of romance.

Twelve Trips Daily in Each DireCtion.

The journeys undertaken by the company's conveyances are, however, limited tor the greater part to the territory between Derby and Belper, there being 12 trips undertaken daily in each direction between the capital of the cuunty and the thriving manufacturing town with, which the name of the Strutt family, now represented in the peerage by Baron Belper, is indissolubly associated. And, in connection, with modernday road developments, it is not uninteresting to recall that the last, holder of that title, who was the first, chairman of the Nottinghamshire County Council, was responsible, as a 'subsidiary official representative of the Home Office in the House of Lords, for many of the legis

lative arrangements, which have still a potent bearing upon the administration of nighway aifairs, long antecedent to the period of fuller control by the Ministry of Transport.

The "journey from Derby to Bakewell is acconiplished by the company's buses in a period of 2* hours at a fare of 4s., which is not inordinately expensive in contrast with present, railway rates, the manifest advantages presented to tourists being the possibility of breakina the travel at intermediate points, affording ready access to the famous peaks from which, athwart the DerWent, views of immeasurable grandeur are presented. For example, those who from -Whatstandwell have never assimilated tha beauties of the towering heights, can have but a puerile conception of the-impressiveness of Derbyshire's terrain, and that famous summit is brought within Measurable reach of travellers by the company's vehicles at the moderate fare of is. 8d. from Derby, the price to Matlock Bath involving, an expenditure of another lid., and the distance to Matlock Bath being rendered possible of completion for a total outlay of 2s. 7d. from the starting point in the' capital of the county.

Shorter journeys are included in those between Derby and Melbourne, from Which 12 buses run in each direction daily, including Sundays, with two extra cars on Saturday,' permitting, in the D latter case, a departure from erby as late as 9:3(b p.m., the last conveyance leaving Melbourne at 10.30, and being due back at Derby at 11.15, this route embracing within its intervening scope Stanton'

by-Bridge Swarkestene Chellesion, Shelton Lock and AlLeston, taking within .this purview the journey upon the return route, the fare for the entire distanoe being a shilling only. Nothing in the nature of an afternoon holiday excursion could be more delectable than a walk from Swarkestone to Weston-on-Trent. But the possibilities are inexhaustible also in regard to their variety of picturesqueness in other directions.

The Facilities for Special Catering.

Whilst utilization of the regular time tableaffords manifold opportunities, the company has laid itself out for many brandies of special catering, of which a typical example is afforded by the means presented of chartering special conveyances for parties, desirous of visiting Haddon and Chatsworth, allowing of an inspection of the scene of 'Dorothy Vernon's romantic adventure, and hence to Chatsworth, the Palace of the Peak, with its art treasures which may be rendered capable of inspection to those who possess special permits for viewing the Duke of Devonshire's stately home. But there are other and more readily accessible advantages offered to users of the company's-buses plying from Derby, of which not the least attractive is that embodied in the plan of leaving the Amber

gate, at Belper, walking-to nber gate, and spending a delightful time in a ramble through the woods; or, in another way, proceeding;by the. motor to Flatten, walking to Tuthury, visiting the old castle ruins, having tea at that sequestred spot, and returning from Hatton in the evening.

The beauties of the Via. Genie are also placedawithin easy reach by the company's excellently-arranged services which are providing facilities at inexpensive rates for., reaching spots which are remote from the beaten tracks, of which heavily-laden chars-it-banes can take little cognizance in their swiftly. moving progress between larger centres. But, not less valuable as another link D40 in the chain :of communication supplied by the company's enterprise is that in relation to the possibility of travel into Staffordshire territory from Derby, which is furnished by the service of eight buses running daily in each direction on ' weekdays, with two traversing the roads to and fro on Sunday, between Cheap' side, Derby, andAibartonaon-Trent, passing, on,the outward journeys in their sequence, through Littleover, Finden Lane End, Spread Eagle, "Millington, Renton (the locale of the famous school which has evolved so many keen men who have distinguished themselves in professional -afid commercial careers), and Newton' Solney, the journey either way being. accomplished in an hour and five minutes at the moderate fare of is. ficl.'.for the complete distance between Derby and the main centre of the brewing industry Connecting Derby with Hatton there is a further interesting development of enterprise connecting in its progress the Cheapaide point of departure with Mickleover, Burnaston, Etwall, and Hilton. But, it is in regard to the colliery districts trending from Derby to Heanor that the utility of the company's arrangements is also being demonstrated. -.a

In other directions there is no limit to the picturesque routes through the Peak territory, of which the service between Derby and Ashboutne via Brailsford constitutes a notable feature, passing Ma.ckworth, Kirk Langley, ,the Rock of Stones, Shir:ey and Osmaston Lane Ends; an alternative route between Derby and Ashbottrne ,being hy way of .Quarndon, Kedleston, Weston Underwood, Mugginton, Cross of Hands, • Helland, and Bradley, the fare from Derby to Ashbourne being 2s. 2d., In relation to the smaller district see

vices, the completeness of arrangements is thus adequately exemplified whilst, upon the longer routes, the same completeness is being manifested. One fears, however, that the recent trend of events may seriously militate against the possibility of the maintenance of arrangements by the Trent Traction Co. at present economical rates, but, whatever may happen in that connection, the company may reasonably claim to have, hitherto, maintained a standard of faxes which, having regard to the invaluable convenience of enabling passengers to alight at intervening points, has placed existing railway services at a complete disadvantage in the comparison of relative fares.

Need to Avoid Curtailment of the Services.

That, under present a conditions i

resultg from increased working expenses, any appreciable curtailment of the service 'should be rendered imperaa tive, either in the Nottinghamshire or Derbyshire areas, is a contingency which in the -public interest would be greatly deplored.

Economic problems, following upon increased cost of labour and raw materials, are, however, adding to the perplexities of the situation, which are not limited in their scope to the operations of the Trent Motor Traction Co., whose enterprise has set a laudable example to road traffic organizations throughout the Midland territories Whatever the ultimate developments' may be upon the score of prices charged, it is to the credit of the company, whose operations radiate from Derby, that rates have been hitherto maintained which represent entire consideration for the public interest, having regard to the

facilities' afforded. And, in this connection, it may be claimed that, whilst, in most .instances, there is a necessary disparity between present railway fares and motorbus charges' such small differences.' as are entailed by the scale are adequatgly compensated for by the greater conveniences supplied for reaching objective points from which existira: railway stations are remote. Thereb! the value of the flexibility of road services is being amply demonstrated in -Notts. and Derbyshire, as in other areas in which enterprise has not been lacking.