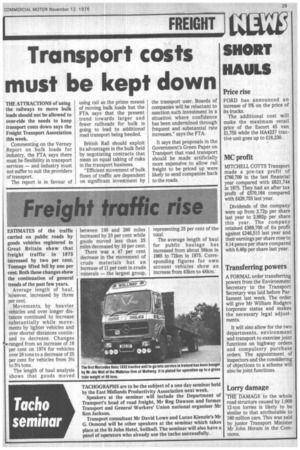 FORD has announced an increase of 5% on the price of its trucks.

A FORMAL order transferring powers from the Environment Secretary to the Transport Secretary was laid before Parliament last week. The order will give Mr William Rodgers corporate status and makes the necessary legal adjustments.

It will also allow for the two departments, environment and transport to exercise joint functions on highway orders and compulsory purchase orders. The appointment of inspectors and the considering of objections to a scheme will also be joint functions.

THE DAMAGE to the whole road structure caused by 1,000 12-ton lorries is likely to be similar to that attributable to 160 million cars. This was said by junior Transport Minister Mr John Horam in the Commons.