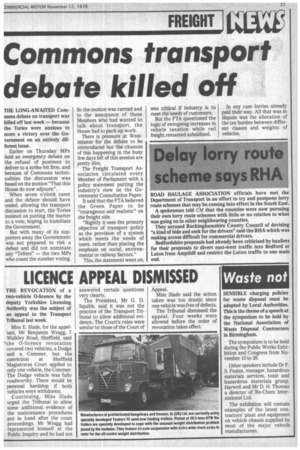 THE REVOCATION of a two-vehicle 0-licence by the deputy Yorkshire Licensing Authority was the subject of an appeal to the Transport Tribunal last week.

Miss E. Slade, for the appellant, Mr Benjamin Wragg, 7 Walkley Road, Sheffield, said ",the 0-licence revocation covered two vehicles, a Dodge and a Commer, but the conviction at Sheffield Magistrates Court applied to only one vehicle, the Commer. The Dodge vehicle was fully roadworthy. There would be personal hardship if both vehicles were withdrawn.

Continuing, Miss Slade urged the Tribunal to allow some additional evidence of the maintenance procedures put in hand after the court proceedings. Mr Wragg had represented himself at the Public Inquiry and he had not answered certain questions very clearly.

The President, Mr G. D. Squibb, said it was not the practice of the Transport Tribunal to allow additional evidence. The Court's rules were similar to those of the Court of Appeal.

Miss Slade said the action taken was too drastic since one vehicle was free of defects.

The Tribunal dismissed the appeal. Four weeks were allowed before the order of revocation takes effect.