OBSCURED MIRRORS -NOT A BREACH 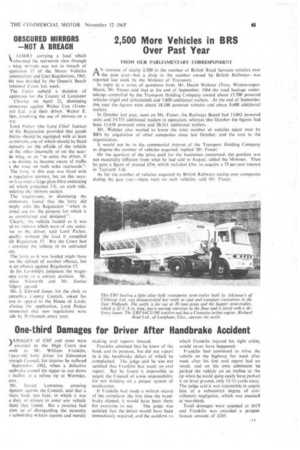 Page 63, 12th November 1965 — OBSCURED MIRRORS -NOT A BREACH
Close
Noticed an error?
If you've noticed an error in this article please click here to report it so we can fix it.
Keywords : Mirrors, Truck, Lorry, Wing Mirror

k LORRY carrying a load which 3, obscured the rearwards view through

wing mirrors was not in breach of egulation 17 of the Motor Vehicles :Ionstruction and Use) Regulations, 1963. his was decided by the Queen's Bench ivisional Court last week.

The Court upheld a decision of agistrates for the County of Lancaster . Chorley on April 22, dismissing immonses against Walter Cox (Transart) Ltd. and their driver, Walter E. Ben, involving the use of mirrors on a Try,

Lord Parker (the Lord Chief Justice) .id the Regulation provided that goods :hides should be equipped with at least I/0 mirrors, one of which should be fitted (ternally on the offside of the vehicle id the other internally or on the nearde wing. so as to assist the driver, if !. so desires. to become aware of traffic a the road on both sides rearwards ". The lorry in this case was fitted with re regulation mirrors, but on this occaCM it carried a large glass-fibre swimming Nal which projected 3 ft. on each side, :ndering the mirrors useless.

The magistrates, in dismissing the immonses, found that the lorry did )mply with the Regulation " when in armal use for the purpose for which it as constructed and designed

Clearly, the vehicle loaded as it was ld no mirrors which were of any assist ice to the driver, said Lord Parker, qUally. without the load it complied ith Regulation 17. But the Court had

consider the vehicle in its unloaded ate.

The lorry as it was loaded might have en the subject of another offence, but at an offence against Regulation 17.

In his Lordship's judgment the magisates came to a correct decision. Mr. Isticc Ashworth and Mr. Justice ridgery agreed, Mr. J. Edward Jones, for the clerk to ancashire County Council, asked for ave to appeal to the House of Lords. efusing, the application, Lord Parker )mmented that new regulations were ade by Parliament every year,