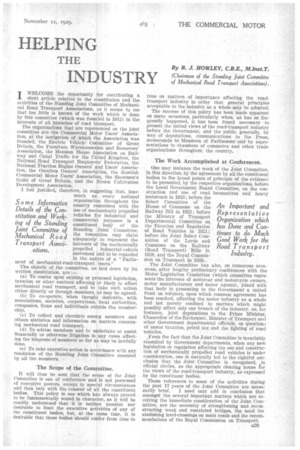 Page 135, 12th November 1929 — HELPING
Close
Noticed an error?
If you've noticed an error in this article please click here to report it so we can fix it.

T WELCOME the opportunity for contributing a I short article relative to the constitution and the activities of the Standing Joint Committee of Mechanical Road Transport Associations, as it seems to me that too little is known of the work which is done by this committee (which was founded in 1912) in the interests of all branches of road transport.

I feel justified, therefore, in suggesting that, inasmuch as every national organization throughout the country concerned with the use of mechanically propelled vehicles for industrial and commercial purposes is a constituent body of the Standing Joint Committee, the committee may claim adequately to represent the interests of the mechanically propelled industrial-vehicle movement and to be regarded in the nature of a "Parliament of mechanical-road-transport users."

The objects of the committee, as laid down by its written constitution, are :- (a) To confer upon existing or proposed legislation, taxation or other matters affecting or likely to affect mechanical road transport, and to take such action either directly or through members, as may be agreed.

(b) To co-operate, when thought desirable, with associations, societies, corporations, local authorities, companies, firms and individuals outside the membership.

(c) To collect and circulate among members and others statistics and information on matters concerning mechanical road transport.

(d) To advise members and to undertake or assist financially or otherwise litigation in any cases affecting the interests of members so far as may he lawfully done, (e) To take executive action in accordance with any resolution of the Standing Joint Committee assented • by all the members.

Some Informative Details of the Constitution and Working of the Standing Joint Committee of Mechanical Road Transport Associ ations.

The Scope of the Committee.

It will thus be seen that the scope of the Joint Committee is one of conference and is not possessed of executive powers, except in special circumstances and then Only with the consent of all the constituent bodies. This policy is one which has always proved to be fundamentally sound in character, as it will be readily understood that it is neither possible nor desirable to limit the executive activities of any of the constituent bodies, but, at the same time, it is desirable that these bodies should confer from time to time on matters of importance affecting the roadtransport industry in order that general principles acceptable to the industry as a whole may be adopted.

The success of this policy has been made apparent on many occasions, particularly when, as has so frequently happened, it has been found necessary to present the united views of the road-transport industry before the Government, and the public generally, by way of deputations, communications to the Press, memoranda to Members of Parliament and by representations to chambers of commerce and other trade organizations throughout the country.

The Work Accomplished at Conferences.

One may instance the work of the Joint Committee, in this direction, by the agreement by all the constituent bodies to the broad points of principle of the evidence to be presented, by the respective organizations, before the Local Government Board Committee, on the construction and use of road locomotives and heavy motorcars in 1910; before the Select Committee of the House of Commons on the Railway Bill in 1922; before the Ministry of Transport Departmental Committee on the Taxation and Regulation of Road Vehicles in 1921; before the joint Select Committee of the Lords and Commons on the Railway (Road Transport) Bills in 1928, and the Royal Commission on Transport in 1929.

The Joint Committee has also, on numerous occasions, after lengthy preliminary conferences with the Motor Legislation Committee (which committee represents the interests of motorcar and motorcycle owners, motor manufacturers and motor agents), joined with that body in presenting to the Government a united front on subjects, upon which common agreement has been reached, affecting the motor industry as a whole and not merely confined to matters which might possibly affect only one branch of the industry, as, for instance, joint deputations to the Prime Minister, Chancellor of the Exchequer, Minister of Transport anll other Government departmental officials, on question; of motor taxation, petrol tax and the lighting of road vehicles.

.From the fact that the Joint Committee is invariably consulted by Government departments, when any new legislation or regulation affecting the use and construction of mechanically propelled road vehicles is under consideration, one is naturally led to the rightful conclusion that the Joint Committee is recognized, in official circles, as the appropriate clearing house for the views of the road-transport industry, as expressed by the constituent bodies.

These references to some of the activities during the past 17 years of the Joint Committee are neces sarily brief. I need only add in conclusion that amongst the several important matters which are receiving the immediate consideration of the Joint Committee, are the necessity of strengthening and reconstructing weak and restricted bridges, the need for abolishing level-crossings on main roads and the recommendations of the Rival Commission on Transport.

An Important and Representative Organization which has Done and Continues to do Much Good Work for the Road Transport industry.