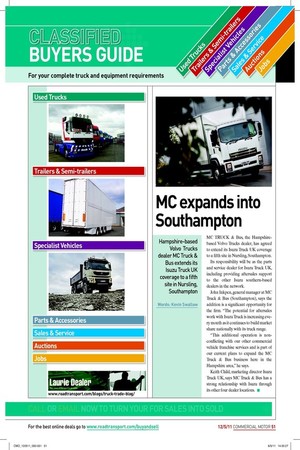 Page 44, 12th May 2011 — MC expands into Southampton
Close
Noticed an error?
If you've noticed an error in this article please click here to report it so we can fix it.
Keywords : Transport, Land Transport, Road Transport, Isuzu, Trucks, Volvo Trucks

Its responsibility will be as the parts and service dealer for Isuzu Truck UK, including providing aftersales support to the other Isuzu southern-based dealers in the network.

John Inkpen, general manager at MC Truck & Bus (Southampton), says the addition is a signiicant opportunity for the irm. “The potential for aftersales work with Isuzu Truck is increasing every month as it continues to build market share nationally with its truck range.

“This additional operation is nonconlicting with our other commercial vehicle franchise services and is part of our current plans to expand the MC Truck & Bus business here in the Hampshire area,” he says.