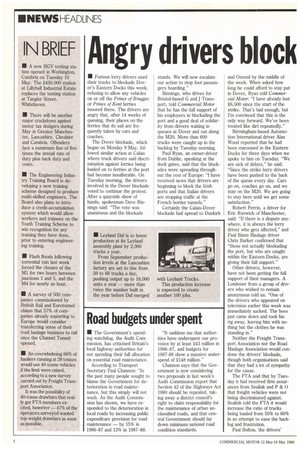 Page 14, 12th May 1988 — Road budgets under spent
Close
Noticed an error?
If you've noticed an error in this article please click here to report it so we can fix it.
Keywords : Audit Commission, Highways Act, Politics, Business / Finance

• The Government's spending watchdog, the Audit Commission, has criticised Britain's local highway authorities for not spending their full allocation on essential road maintenance.

According to Transport Secretary Paul Channon: "In the past many people sought to blame the Government for deterioration in road maintenance, but this simply will not wash. As the Audit Commission has shown, we have responded to the deterioration in local roads by increasing public expenditure provision for road maintenance — by 15% in 1986-87 and 13% in 1987-88. "It saddens me that authorities have underspent our provision by at least 243 million in 1986-87, and budgets for 1987-88 show a massive underspend of 2148 million."

Channon says that the Government is now considering two proposals in last week's Audit Commission report that Section 42 of the Highways Act 1980 should be repealed, taking away a district council's right to claim responsibility for the maintenance of urban unclassified roads, and that central Government should lay down minimum national road condition standards.