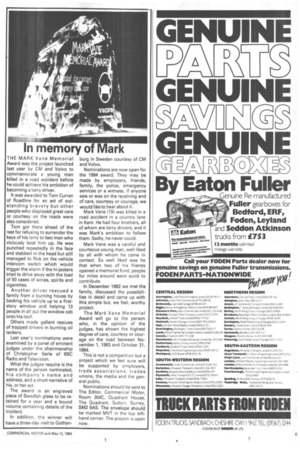 Page 67, 12th May 1984 — n memory of Mark
Close
Noticed an error?
If you've noticed an error in this article please click here to report it so we can fix it.
Keywords : Measuring Instruments, Quadrant, Surveying, Vane, Disaster / Accident

THE MARK Vane Memorial Award was the project launched last year by CM and Volvo to commemorate a young man killed in a road accident before he could achieve his ambition of becoming a lorry driver.

It was awarded to Tom Curran of Roadline for an act of outstanding bravery but other people who displayed great care or courtesy on the roads were also considered.

Tom got there ahead of the rest for refusing to surrender the keys of his lorry to two men who viciously beat him up. He was punched repeatedly in the face and stabbed in the head but still managed to flick on the vehicle intercom switch which would trigger the alarm if the hi-jackers tried to drive away with the load of 50 cases of wines, spirits and cigarettes.

Another driver rescued a family from a burning house by backing his vehicle up to a firststory window and helping 13 people in all out the window cab onto his roof.

Others made gallant rescues of trapped drivers in burning oil tankers.

Last year's nominations were examined by a panel of eminent judges under the chairmanship of Christopher Serle of BBC Radio and Television.

What the judges require is the name of the person norriinated, his company's name and address, and a short narrative of his, or her act.

The award is an engraved piece of Swedish glass to be retained for a year and a bound volume containing details of the incident.

In addition, the winner will have a three-day visit to Gothen burg in Sweden courtesy of CM and Volvo.

Nominations are now open for the 1984 award. They may be made by employers, friends, family, the police, emergency services or a witness. If anyone saw or was on the receiving end of care, courtesy or courage, we would like to hear about it.

Mark Vane (19) was killed in a road accident in a country lane in Kent. He had four brothers, all of whom are lorry drivers, and it was Mark's ambition to follow them. Sadly, he never could.

In December 1982 we met the family, discussed the possibilities in detail and came up with this simple but, we feel, worthy project.

The Mark Vane Memorial Award will go to the person who, in the opinion of the judges, has shown the highest degree of care, courtesy or courage on the road between November 1, 1983 and October 31, 1984.

This is not a competition but a project which we feel sure will be supported by employers, trade associations, trades unions, the media and the general public.

Nominations should he sent to The Editor, Commercial Motor, Room 304C, Quadrant House, The Quadrant, Sutton, Surrey, SM2 -5AS. The envelope should be marked MVT in the too lefthand corner. The project is open now.