LMC has made the biggest mark 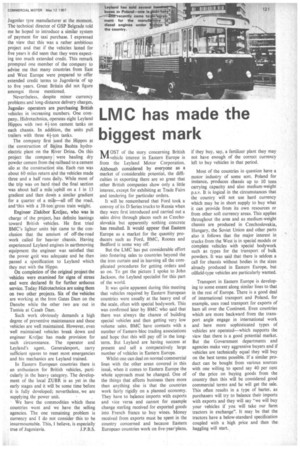 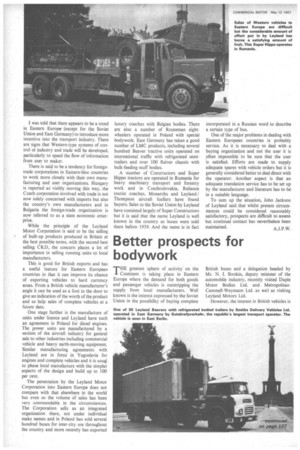 Page 123, 12th May 1967 — LMC has made the biggest mark
Close
Noticed an error?
If you've noticed an error in this article please click here to report it so we can fix it.
Keywords : Road Transport, British Leyland, Buses, Double-decker Buses, Leyland Motors, Bmc, Leyland Trucks, Business / Finance

MOST of the story concerning British vehicle interest in Eastern Europe is from the Leyland Motor Corporation. Although considered by everyone as a market of considerable potential, the difficulties in exporting there are so great that other British companies show only a little interest, except for exhibiting at Trade Fairs and tendering for particular orders.

It will be remembered that Ford took a convoy of its D Series trucks to Russia when they were first introduced and carried out a sales drive through places such as Czechoslovakia but apparently nothing concrete has resulted. It would appear that Eastern Europe as a market for the quantity producers such as Ford, BMC, Rootes and Bedford is some way off.

But the LMC has put considerable effort into fostering sales to countries beyond the the iron curtain and in learning all the complicated procedures for getting orders and so on. To get the picture I spoke to John Jackson, the Leyland specialist for this part of the world.

It was quite apparent during this meeting that vehicles required by Eastern 'European countries were usually at the heavy end of the scale, often with special bodywork. This was confirmed later by BMC who said that there was always the chance of building special vehicles and then getting very low volume sales. BMC have contacts with a number of Eastern-bloc trading associations and hope that this will pay off in the longterm. But Leyland are having success at present and sell a comparatively large number of vehicles in Eastern Europe.

Whilst one can deal on normal commercial lines with the other areas covered in this issua, when it comes to Eastern Europe the whole approach must be changed. One of the things that affects business there more than anything else is that the countries work fairly rigidly on a planned economy. They have to balance imports with exports and vice versa and cannot for example change sterling received for exported goods into French franes to buy wines. Money received from exports must be spent in the country concerned and because Eastern European countries work on five-yearplans, if they buy, say, a fertilizer plant they may not have enough of the correct currency left to buy vehicles in that period.

Most of the countries in question have a motor industry of some sort. Poland for instance, produces chassis up to 10 tons carrying capacity and also medium-weight p.s.v. It is logical in the circumstances that the country will not use hard currency which may be in short supply to buy what it can provide from its own resources or from other soft currency areas. This applies throughout the area and as medium-weight chassis are produced in Czechoslovakia, Hungary, the Soviet Union and other parts also it follows that the major interest in trucks from the West is in special models or complete vehicles with special bodywork such as types for the transport of bulk powders. It was said that there is seldom a call for chassis without bodies in the sizes already produced in Eastern Europe, but oilfield-type vehicles are particularly wanted.

Transport in Eastern Europe is developing to some extent along similar lines to that in the rest of Europe. There is a good deal of international transport and Poland, for example, uses road transport for exports of ham all over the Continent. Even countries which are more backward from the transport angle engage in international work and here more sophisticated types of vehicles are operated—which supports the view that there is a good potential market. But the Government departments and agencies make very aggressive buyers and if vehicles are technically equal they will buy on the best terms possible. If a similar product can be bought from various sources with one willing to spend say 40 per cent of the price on buying goods from the country then this will be considered good commercial terms and he will get the sale. This often results in a type of barter, as purchasers will try to balance their imports with exports and they will say "we will buy your vehicles if you will take our farm tractors in exchange". It may be that the tractors have a below-standard specification coupled with a high price and then the haggling will start. I was told that there appears to be a trend in Eastern Europe (except for the Soviet Union and East Germany) to introduce more incentive into the transport industry. There are signs that Western-type systems of control of industry and trade will be developed, particularly to speed the flow of information from user to maker.

There is said to be a tendency for foreigntrade corporations in Eastern-bloc countries to work more closely with their own manufacturing and user organizations. Hungary is reported as visibly moving this way, the Czech corporation involved with trade is not now Solely concerned with imports but also the country's own manufacturers and in Bulgaria the foreign-trade organization is now referred to as a state economic enterprise.

While the principle of the Leyland Motor Corporation is said to be the selling of built-up products produced in Britain at the best possible terms, with the second best selling CKD, the concern places a lot of importance in selling running units to local manufacturers.

This is good for British exports and has a useful feature for Eastern European countries in that it can improve its chance of exporting vehicles to hard currency areas. From a British vehicle manufacturer's angle it can be used as a foot in the door to give an indication of the worth of the product and so help sales of complete vehicles at a future date.

One stage further is the manufacture of units under licence and Leyland have such an agreement in Poland for diesel engines. The power units are manufactured by a section of the aircraft industry for general sale to other industries including commercial vehicle and heavy earth-moving equipment. Similar manufacturing agreements with Leyland are in force in Yugoslavia for engines and complete vehicles and it is usual to phase local manufacture with the simpler aspects of the design and build up to 100 per cent.

The penetration by the Leyland Motor Corporation into Eastern Europe does not compare with that elsewhere in the world but even so the volume of sales has been very -commendable in the circumstances. The Corporation sells as an integrated organization there, not under individual make names and in Poland has sold several hundred buses for inter-city use throughout the country and more recently has exported luxury coaches with Belgian bodies. There are also a number of Routeman eightwheelers operated in Poland with special bodywork. East Germany has taken a good number of LMC products, including several hundred Beaver tractive units operated on international traffic with refrigerated semitrailers and over 100 Reiver chassis with bulk-feeding-stuff bodies.

A number of Constructors and Super Hippo tractors are operated in Rumania for heavy machinery transport and forestry work and in Czechoslovakia, Reliance tourist coaches, Monarchs and Leyland / Thompson aircraft fuellers have found buyers. Sales to the Soviet Union by Leyland have consisted largely of Super Constructors but it is said that the name Leyland is well known in the country as buses were sold there before 1939. And the name is in fact incorporated in a Russian word to describe a certain type of bus.

One of the major problems in dealing with Eastern European countries is probably service. As it is necessary to deal with a buying organization and not the user it is often impossible to be sure that the user is satisfied. Efforts are made to supply adequate spares with vehicle orders but it is generally considered better to deal direct with the operator. Another aspect is that an adequate translation service has to be set up by the manufacturer and literature has to be in a suitable language.

To sum up the situation, John Jackson of Leyland said .that whilst present circumstances could be considered reasonably satisfactory, prospects are difficult to assess but continual contact has nevertheless been maintained. AJ.P.W.