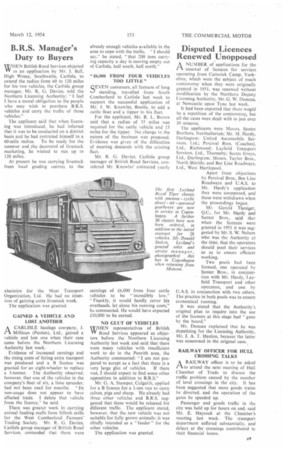 Page 43, 12th March 1954 — Disputed Licences Renewed Unopposed
Close
Noticed an error?
If you've noticed an error in this article please click here to report it so we can fix it.
Keywords : Internet Activism, Meetin, Technology

A NUMBER of 'applications for the renewal of licences for services operating from Catterick Camp, Yorkshire, which were the subject of much controversy when they were originally granted in 1951, was renewed without modification by the Northern Deputy Licensing Authority, Mr. G. W. Duncan, at Newcastle upon Tyne last week. It had been expected that there wottld be a repetition of the controversy, but all the cases were dealt with in just over 30 minutes. The applicants were Messrs. Sunter Brothers, Northallerton; Mr. M. Hardy, Darlington; United Automobile Services, Ltd.; Percival Bros. (Coaches), Ltd.. Richmond; Layfield Transport Services, Ltd., Thornaby; Scotts Greys, Ltd., Darlington; Messrs. Taylor Bros., North Shields; and Bee Line Roadways, Ltd., West Hartlepool.

Apart from objections by Percival Bros.. Bee Line Roadways and U.A.S. to Mr. Hardy's application they were unopposed, and these were withdrawn when the proceedings began. Mr. Gerald Thcsiger. Q.C., for Mr. Hardy and

when the licences were granted in 1951 it was sug gested by Mr. S. W. Nelson

who was the Authority at the time, that the operators

should pool their services so as to ensure efficient working,

Two pools had been formed, one operated by Sunter Bros., in conjunc tion with Mr. Hardy, Layfield Transport and other

operators, and one by U.A.S. in conjunction with two others. The practice in both pools was to ensure economical running.

It was stated that the Authority's original plan to inquire into the use of the licences at this stage had "gone by the board." Mr. Duncan explained that he was deputizing for the Licensing Authority, Mr. J. A. T. Hanlon, because the latter was concerned in the original case.

RAILWAY OFFICER FOR HULL CROSSING TALKS A RAILWAY officer is to be asked to attend the next meeting of Hull Chamber of Trade to discuss the traffic problem caused by the number of level crossings in the city. It has been suggested that more goods trains be diverted, and the operation of the gates be speeded up. Passenger and goods traffic in the city was held up for hours on end, said Mr. E. Haycock at the Chamber's meeting last week. The transport department suffered substantially, and delays at the crossings contributed to their financial losses.