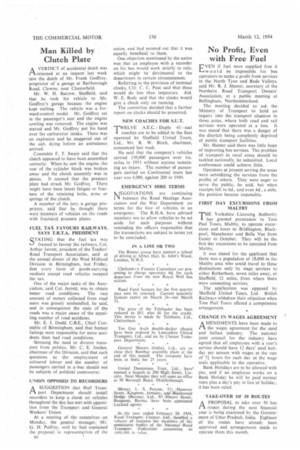 Page 40, 12th March 1954 — Man Killed by Clutch 'Plate
Close
Noticed an error?
If you've noticed an error in this article please click here to report it so we can fix it.
Keywords : Transport, Truck, Vehicles, Mot Test

AVERDICT of accidental death was returned at an inquest last week into the death of Mr. Frank Godfrey, proprietor of a garage at Bar[borough Road, Clowne. near Chesterfield.

Mr. W. H. Barrow. Sheffield, said that he took his vehicle to Mr. Godfrey's garage because the engine kept stalling. The vehicle was a forward-control model. Mr. Godfrey sat in the passenger's seat and the engine cowling was removed. The engine was started and Mr. Godfrey put his hand over the carburetter intake. There was an explosion and he staggered out of the cab, dying before an ambulance arrived.

Constable F. T. Swain said that the clutch appeared to have been assembled correctly. When he saw the engine, the rear of the cylinder block was broken away and the clutch assembly was in pieces. It seemed that the pressure plate had struck Mr. Godfrey. There might have been latent fatigue or fracture of the retaining bolts, arms or springs of the clutch.

A member of the jury, a garage proprietor, said that he thought there were numbers of ,,ehicies on the roads with fractured pressure plates.

QTAT1NG • that the fuel tax was L) framed to favour the railways, Col. Arthur Jerrett, president of the Traders' Road Transport Association, said at the annual dinner of the West Midland Division in Birmingham, last Friday, that every form of goods-carrying medium except road vehicles escaped the tax.

One of the major tasks of the Association, said Col. Jerrett, was to obtain better road conditions. The vast amount of money collected from road users was grossly mishandled, he said, and in consequence the state of the roads was a major cause of the appalling number of road accidents.

-Stressing the need to divorce transport from politics, Mr. C. E. Jordan, chairman of the Division, said that such questions as the employment of coloured labour and the number of passengers carried in a-bus should not be subjects of political controversy.

A SUGGESTION that Hull Trans/A port Department should install recorders to keep a check on vehicles throughout the day has met with opposition from the Transport and General Workers' Union.

At a meeting of the -committee on Monday, the general manager. .Mr. G. H. Pulfrey, said he had explained the proposal to representritives of the B6 union, and had pointed out that it was equally beneficial to them.

One objection mentioned by the union was that an employee with a recorder on his bus would work strictly to rule, which might be detrimental to the department in certain circumstances.

Referring to the provision of terminal clocks, Cllr. C. C. Peat said that these would do less than inspectors. Aid, W. E. Body said that the clocks would give a check only on running.

The committee decided that a further report on clocks should be presented.

He said that the company's vehicles carried 150,000 passengers over lm. miles in 1953 without anyone sustainingan injury. The number of passengers carried on Continental tours last year was 4,000, against 200 in 1949,

MEGOT1ATIONS are continuing 11 between the Road Haulage Association and the War Department on terms for the hire of vehicles in an emergency. The R.H.A. have advised members not to allow vehicles to be set aside for such purposes without reminding the officers responsible that the transactions are subject to terms yet to be concluded.

Cheltenh ss Finance Committee are proposing to charge operators 4cL for each departure from the new Royal Well bus station.

Road Fund licences for the first quarter may now be renewed. Current quarterly licences expire on March 24—not March 31.

The price of the Teleloader has been reduced to £63, plus £6 for the cradle. This device is made by Telehoist, Ltd., Cheltenham.

General Motors (India), Ltd., are to close their Bombay assembly plant at the end of this month The company have been in India for 25 years.

In . the year ended February 28, 1954, Road TransportFinance, Ltd., handled a volume of business for members of the constituent bodies of the National Road Transport Federation -amounting to €600.000 in value.