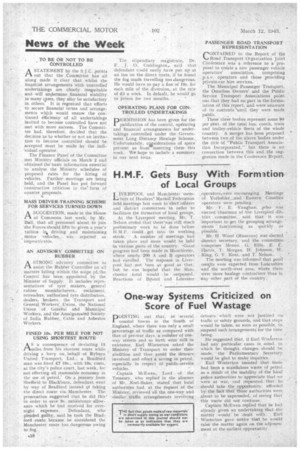 Page 20, 12th March 1943 — H.M.F. Gets Busy
Close
Noticed an error?
If you've noticed an error in this article please click here to report it so we can fix it.
Keywords : Cities In England, Metropolitan Boroughs, Runcorn, Liverpool, Manchester

of Local With Formation Groups

At the Liverp.Ool meeting, Mr. T. Nelson stated that therewas.still, much preliminary work to be done before H.M.F. could . get into its working _

stride. A number of meetings had taken place and more would be held

-various parts of the country. ...Goad progress had been made in Manchester, where_ nearly 200 A and B operators had enrolled. The response in Liverpool had. not beets as good as that, hut he was hopeful that the Manchester .-total would . be surpassed. Reactions of Bristol and Leicester

Mr. F. E. -Vaughan., .17.s.tho was elected chairman of the Liverpool district committee, said that it was important to get the grouping•arrangemerits ' functioning as. quickly as pOssible.

The meeting was infOrreed" that good results were expected from • Laricas'hire and the north-west _area, • *here. there were more haulage contradtors• than in Any other part ot the conhtry...