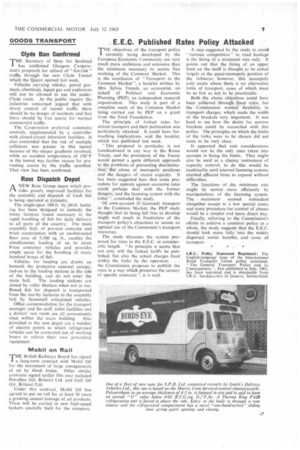 THE objectives of the transport policy currently being developed by the European Economic Community are very much more ambitious and extensive than the minimum necessary to secure free working of the Common Market. This is the conclusion of Transport in the Common Market", a booklet written by Mrs. Sylvia Trench, an economist, on behalf of Political and Economic Planning (PEP), an independent research organization. This study is part of a complete study of the Common Market being carried out by PEP on a grant from the Ford Foundation.

The principle of forked rates for inland transport and their publication was particularly attacked. It could have farreaching implications, said the booklet, which was published last week.

"This proposal in particular is not foreshadowed in any way in the Rome Treaty, and the provisions of the Treaty would permit a quite different approach to the problems of preventing discrimination, the abuse of monopoly positions and the dangers of excess capacity. It has been suggested here that some procedure for appeals against excessive rates could perhaps deal with the former dangers, and the licensing system with the latter ". concluded the study.

Of own-account (C-licensed) transport in the Common Market, the PEP study thought that its being left free to develop might well result in frustration of the transport policy's objectives to secure an optimal use of the Community's transport resources.

The study discusses the system proposed for rates in the E.E.C. at considerable length. " In principle it seems that not only will the forked tariffs be published, but also the actual charges fixed within the forks by the operators . . the Commission proposes to publish the rates in a way which preserves the secrecy of specific contracts '', it is said.

A step suggested by the study to avoid "ruinous competition ". in road haulage is the fixing of a minimum rate only. It points out that the fixing of an upper limit on the tariff is thought to be aimed largely at the quasi-monopoly position of "the railways; however, this monopoly only exists where there is no alternative form of transport, cases of which must be so few as not to be practicable.

Both the above objectives could have been achieved through fixed ratcs, but the Commission wanted flexibility in transport charges. which made the width of the brackets very important. It was hard to see how the desire for narrow brackets could be reconciled with this policy. The principles on which the limits of the forks were to be chosen did not seem to be very clear.

It appeared that cost considerations would not he the only ones taken into account in fixing the limits. They might also be used as a clumsy instrument of capacity control; to do this would be inadvisable until internal licensing systems enabled efficient firms to expand without difficulties.

The functions of the minimum rate might be served more efficiently by manipulations of the licensing system. The maximum seemed redundant altogether except in a few special cases, and some procedure for control of abuses would be a simpler and more direct way.

-Finally, referring to the Commission's efforts to achieve a common policy as a whole, the study suggests that the E.E.C. should look more fully into the widely dispersed social benefits, and costs of transport.

Policy Statement Reprinted: The English-language issue of the International Road Transport Union policy statement. " The General Transport Policy and its Consequences ", first published in July, 1962, has been reprinted and is obtainable from 1.R.U. headquarters in Geneva, Switzerland.