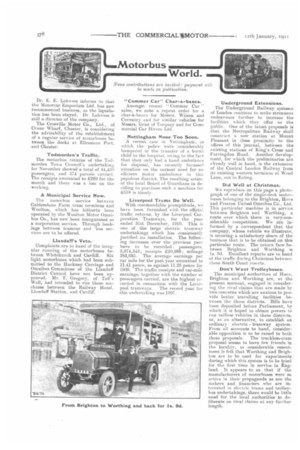 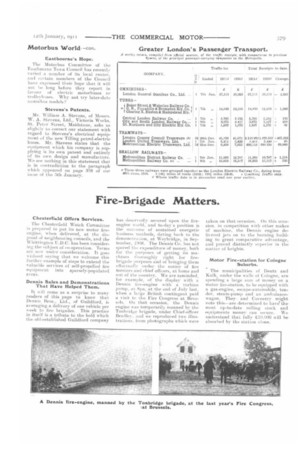 Dr. E. E. Lelevess informs us that the Motorcar Emporium Ltd. has now recommenced business, as the liquidstion has been stayed. Dr. Lehwess is still a director of the company. The Crosville Motor Co., Ltd., of Crane Wharf, Chester, is considering the advisability of the establishment of a regular service of motorbuses between the docks at Ellesmere Port, and Chester.

The motorbus returns of the Todmorden Town Council's undertaking for November showed a total of 44,450 passengers, and 674 parcels carried. The receipts amounted to £289 for the month and there was a loss on the working.

The motorbus service between Calclerstone Farm tram terminus and Woolton, which has hitherto been operated by the Woolton Motor Omnibus Co., has now been inaugurated as a corporation service_ Through bookings between tramcar and 'bus services are to be offered.

Complaints are to hand of the irregular running of the motorbuses between Nilhitchurch and Cardiff. Six light motorbuses which had been submitted to the Hackney Carriage and Omnibus Committee of the Llandaff District Council have not been approved. Mr. T. Gregory, of Taff's Well, had intended to run these machines between the Railway Hotel, LlanclafF Station. and Cardiff.

Amongst recent " Commer Oar" sales, we note a repeat order for a char-ii-bancs for Messrs. Wilson and Coventry and for similar vehicles for Messrs. Grist of Torquay and for Commercial Car Hirers Ltd.

Nottingham None Too Soon.

A recent case in Nottingham, in which the police were considerably hampered in the transfer of a burnt child to the hospital, awing to the fact that they only had a hand ambulance for disposal, has recently focussed attention on the earnest need for an efficient motor ambulance in this populous district. The resulting action of the local Board of Guardians in deciding to purchase such a machine for £518 is timely.

With commendable promptitude, we have been furnished with the official traffic returns, by the Liverpool Corporation Tramways, for the year ended 31st December, 1910. This is one of the large electric tramway undertakings which has consistently justified its installation. The following increases over the previous year have to be recorded: passengers, 3,974,343; receipts £20,988; mileage 283,035. The average earnings per car mile for the past year amounted to 11.41 pence, as against 11.25 pence for 1909. The traffic receipts and car-mile earnings, together with the number of passengers carried, are the highest recorded in connection with the Liverpool tramways. The record year for this undertaking was 1907.

The Underground Railway systems of London continue to make strenuous endeavours further to increase the facilities which they offer to the public. One of the latest proposals is that the Metropolitan Railway shall construct a new station at Mount Pleasant in close proximity to the offices of this journal, between the existing stations of King's Cross and Farringdon Road. Another development, for which the preliminaries are already well in hand, is the extension of the Central London Railway from its existing western terminus at Wood Lane, out to Ealing.

Did Well at Christmas.

We reproduce on this page a photograph of one of the single-deck motorbuses belonging to the Brighton, Hove and Preston United Omnibus Co., Ltd. This particular machine is in service between Brighton and Worthing, a route over which there is very-considerable competition. We are informed by a correspondent that the company, whose vehicle we illustrate, is securing a satisfactory share of the business that is to be obtained on this particular route. The return fare between Brighton and Worthing is ls. 9d. Excellent reports are to hand of the traffic during Christmas between these South Coast resorts.

The municipal authorities of Hove, Brighton and Worthing are, at the present moment, engaged in considering the rival claims that are made by two concerns which are anxious to provide better travelling facilities between the three districts. Bills have been deposited before Parliament, by which it is hoped to obtain powers to run railless vehicles in these districts, or, as an alternative, to establish an ordinary electric tramway system. From all accounts to hand, considerable opposition is to be raised to both these proposals. The trackless-tram proposal seems to have few friends in the locality, as considerable resentment is felt that Worthing and Brighton are to be used for experiments during which this system is to be tried for the first time in service in England. It appears to us that if the manufacturers of motorbuses were as active in their propaganda as are the makers and financiers who are interested in electric trams and trolleybus undertakings, there would be little need for the local authorities to deliberate on rival claims at any further length.

The Motorbus Committee of the Eastbourne Tuwn Council has reeentkr varied a number of its local routes, and certain members of the Council have expressed their hope that it will not be long before they report in favour of electric motorbuses or trolloyhuses. Why not try later-date inutorbus models?

Mr. 'William A. Stevens, of Messrs. W. A. Stevens, Ltd., Victoria Works, St. Peter Street, Maidstone, asks us slightly to correct our statement with regard to Stevens's electrical equipment of the new Tilling petrol-electric buses. Mr. Stevens states that the equipment which his company is supplying is its own patent and entirely of its own design and manufacture. We see nothing in this statement that is in contradiction to the paragraph which appeared on page 358 of our issue of the Mb January.