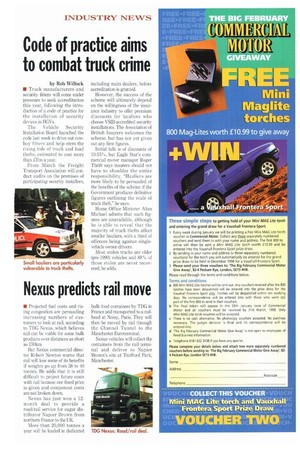 by Rob Willock • Truck manufacturers and security fitters will come under pressure to seek accreditation this year, following the introduction of a code of practice for the installation of security devices in HGVs.

The Vehicle Security Installation Board launched the code last week to drive out cowboy fitters and help stem the rising tide of truck and load thefts, estimated to cost more thanllbn a year.

From March the Freight Transport Association will conduct audits on the premises of participating security installers, including main dealers, before accreditation is granted.

However, the success of the scheme will ultimately depend on the willingness of the insurance industry to offer premium discounts for hauliers who choose VS1B-accredited security installations. The Association of British Insurers welcomes the scheme, but has not yet given out any firm figures.

Initial talk is of discounts of 10-15%, but Eagle Star's commercial motor manager Roger Thrift says insurers should not have to shoulder the entire responsibility. "Hauliers are more likely to be persuaded of the benefits of the scheme if the Government produces definitive figures outlining the scale of truck theft," he says.

Home Office Minister Alun Michael admits that such figures are unavailable, although he is able to reveal that the majority of truck thefts affect smaller hauliers, with a third of offences being against singlevehicle owner-drivers.

Most stolen trucks are older (pre-1990) vehicles and 88% of those stolen are never recovered, he adds.