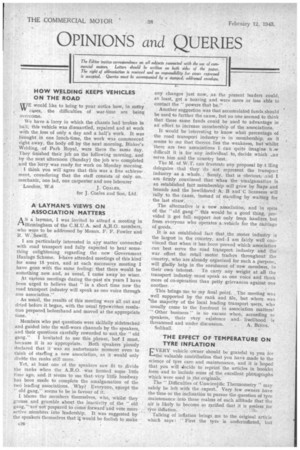 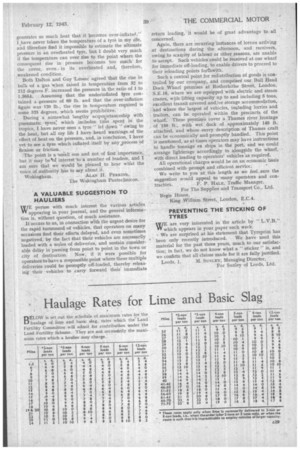 Page 36, 12th February 1943 — OPINIONS and
Close
Noticed an error?
If you've noticed an error in this article please click here to report it so we can fix it.
Keywords :

HOW WELDING KEEPS VEHICLES ON THE ROAD WE would like to bring to your notice how, in meny " cases, the difficulties of war-time are being overcome.

We have a lorry in which the chassis had broken in

halt; this vehicle was dismantled, repaired and at work with the loss of only a day and a half's work. It was brought in one lunch-tithe, the work as commenced right away, the body off by the next morning, Blaker's Welding, -of Park Royal, were there the sane day. They furished their job on the following morning, and by the next afternoon (Sunday) the job was completed and the lorry was ready for work on Monday morning.

I think you will agree that this was a fine achievement, considering that the staff consists of only on. mechanic, one lad, one carpenter and one labourer London, W.:6 J. CONLES, for J. Coales and Son, Ltd.

• A LAYMAN'S viEWs ON ASSOCIATION MATTERS

As a layman, I was invited to atteud a meeting in Birmingham of the C.M.U.A. and A,11.0. members, who were to be addressed by Messrs. F. F. Fowler and R. W. Sewill.

I am particularly interested in any' matter connected with road transport and fully expected to hear something enlightening regarding the new dovernment Haulage Scheme. I-have attended meetings of this kind for some 15 years, and at each successive meeting I have gone with the same feeling: that there would be something new and, as usual, I came away no wiser.

At various meetings during the‘past six years I have been urged to believe that "in a short time now the road transport industry will speak as one voice throngh one association."

As usual, the results of this meeting were all cut and dried before it began, with the usual typewritten resolution prepared beforehand and moved. at the appropriate time.

Members who put questions were skilfully sidetracked and guided into the w.ell-worn channels by the speakers. and their questions carefully reworded to suit,the "old gang." I hesitated to use this phrase, but I must, because it is so appropriate. Both speakers piously declared that it was an unfortunate Moment even to think of starting a new association, as it would only divide the ranks still more.

Yet, at least one of the speakers saw fit to ,divide the ranks when the A.R.O. was forthed some little time ago, and it seems to me that-very littre headway has been made to complete the amalgamation of the two leading associations. . Why? Everyone,. except the old gang," seems to be in favour of it

I blame the members themselves, who, whilst they grouse and grumble about the .inactivity of. the "old gang,"-are not prepared to thine forward and vote more active Members into readership. It was suggested by the speakers themselves that i would be foolish to make

n26 any changes just now, as the present leaders could, at least, get a hearing and were more or less able to contact the "powers that be," Another suggestion was that accumulated funds should he used to further the cause, but no one seemed to think that these same funds could be used to advantage in an effort to increase membership of the associations.

It would be interesting to know what percentage of the road transport industry is in membership. as it seems to me that therein lies the weakness, but -whilst 'there are two associations I can quite imagine h difficult it is for any individual to, decide which -an serve him and the country best.

The M. of W.T. can frustrate any proposal by t fling delegates that they do not represent the transpett industry as a whole.. Surely', that is obvious; Jed I am firmly convinced that when 'the emalgaination is an established fact membership will grow by reaps and bounds and the bewildered-A',-, B andC licensees will rally to the cause, • instead of standing by waiting for

The alternative is a. new association, and in spite of the "old gang" this would be a good 'thing, provided it got full support not only from hauliers but from everyone whooperates a .vehicle for the carriage of goods. It is an established' fact that the motor industry is the largest in the country, and-I am fairly well convinced that when ithas been proved which association can best serve the road transport industry and the war effort the retail motor traders throughout the country, who are already organized for such a purpose, will gladly help in the enrolment of new members, in

their own interest. To carry any weight' at all the transport industry must speak as one voice and think more of co-operation than petty grievances against one another..

This brings meto my final point. The meeting was well supported by the rank and file, but where was the majority of the local leading transport asers, who usually come to the forefront in association matters? " Other business" is no excuse when, according to speakers, their v'ery existence and-livelihood is

threatened and under discussion. • A. BINNS. Solihull.

THE EFFECT OF TEMPERATURE ON TYRE INFLATION L' VERY vehicle owner should be grateful tq you for Lathe valuable contribution that you have made to the science of tyre care and maintenance, and it is *hoped that you will decide to reprint the articles in booklet form and to include some of the excellent phbtogmphs which' were used in the originals.

The "Difficulties of Unscientific Thermometry" may safely be left with the expert. Very few owners have the time or the inclination to pursue the question of tyre maintenance into these realms of such altitude that the air is likely to become so ratified that it is nseless for tyre ihflation.

Talking of inflation brings.me to the original article which says: " First the tyre is underinflated,' but

generates so much heat that it becomes over-inflater)." I have never taken the temperature of a tyre in my life, and therefore find it impossible to estimate the ultimate pressure in an overheated tyre, but I doubt very much if the temperature can ever rise to the point where the consequent rise in pressure becomes, too much for the cover, even in its overheated and, therefore, weakened condition.

Both Dalton and Gay 'Lussac agreed that the rise in bulk iof a gas 'when raised in temperature from 82 to 212 degrees F. increased the pressure in the ratio of 1 to 1.3654. Assuming that the underinflated tyre contained a ,pressure of 60 lb. and that the over-inflation figure was 120 lb., the rise in temperature required is some 525 degrees, which seems prohibitive.

During a somewhat lengthy acquaintanceship with pneumatic tyre S; which includes time spent in the tropics, I have never seen a tyre "let down" owing to the heat, but all my life I have heard warnings.of the effect of heat on the pressure, and, in conclusion, I have yet -to see a tyre which inflated itself by any process of flexion or friction.

The point is a 'small one and not of first importance, but it may bebf interest to a number of teaders, and I am sure that we would be pleased to hear what the voice of authority has to say about it.

A VALUABLE SUGGESTION TO HAULIERS

WE peruse with much interest the various articles appearing in your journal, and the general information is, without question, of much assistance.

Iloccurs to us, in connection with the urgent desire for the rapid tumround of vehicles, that operators on many occasions find their efforts delayed, and even sometimes negatived, by the fact that their vehicles are necessarily loaded with a series of deliveries, and sustain considerable delay in passing from point to point in the town or city of destination. Now, if it were possible for operators to have a responsible point where these multiple deliveries could be promptly off-loaded, thereby releasing their vehicles to carry forward their" immediate return loading, it would be of great advantage to all concerned.

Again, there are recurring instances of lorries arriving at destinations during the afternoon, and receivers, owing to scaccity of labour or Other reasons, are unable to accept. Such vehicles' could be received at our wharf for immediate off-loading, to enable drivers to proceed to their reloading points forthwith.

Such a central point for redistribution of goods is controlled by our company, and comprised our Bull Head Dock Wharf premises at Rotherhithe Street, London, S.E.16, where we are equipped with electric and steam cranes, with' lifting capacity up to and including 5 tons, excellent transit covered and/or storage accommodation, and where the largest of vehicles, including lorries and trailers, can be operated within the precincts of the wharf. These premises Cover a. Thames river frontage of 150 ft., with wet dock of approximately 140 ft. attached, and where every, description of Thames craft can be economically and promptly handled. This point is mentioned, as at times operators may have instructions to handle -tonnage ex ships in the port, and we could arrange lighterage accordingly to alongside the wharf, with direct loading to operators' vehicles as required.

All operational charges would be on an economic basis combined with prompt and efficient service.

PREVENTING THE STICKING OF TYRES' WE are very interested in the article by " L.V.B." which appears in your paper each week.

• We are surprised at his statement that Tyreprim has been only recently introduced. We have used this material for the past three years, much to our satisfaction; in fact, we do not know what a " sticker " is, and we confirm that all claims made for it are fully justified.

For Smiley of Leeds, Ltd.