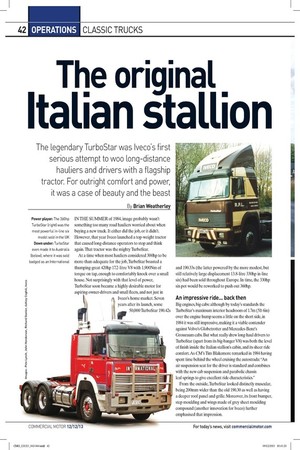 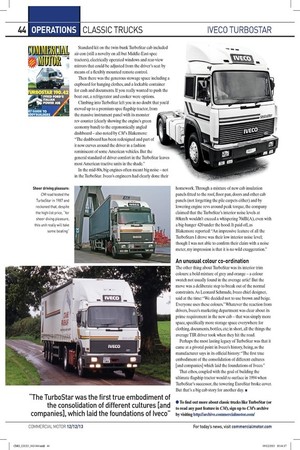 Page 34, 12th December 2013 — The original ItaLian staLbon
Close
Noticed an error?
If you've noticed an error in this article please click here to report it so we can fix it.

The legendary TurboStar was lveco's first serious attempt to woo long-distance hauliers and drivers with a flagship tractor. For outright comfort and power, it was a case of beauty and the beast By Brian Weathertey

IN THE SUMMER of 1984, image probably wasn't something too many road hauliers worried about when buying a new truck. It either did the job, or it didn't. However, that year Iveco launched a top-weight tractor that caused long-distance operators to stop and think again. That tractor was the mighty TurboStar. At a time when most hauliers considered 300hp to be more-than-adequate for the job, TurboStar boasted a thumping-great 420hp 17.2-litre V8 with 1,900Nm of torque on tap, enough to comfortably knock over a small house. Not surprisingly with that level of power, TurboStar soon became a highly desirable motor for aspiring owner-drivers and small fleets, and not just in Iveco's home market. Seven years after its launch, some 50,000 TurboStar 190.42s

and 190.33s (the latter powered by the more modest, but still relatively large displacement 13.8-litre 330hp in-line six) had been sold throughout Europe. In time, the 330hp six-pot would be reworked to push out 360hp. An impressive ride.., back then

Big engines, big cabs: although by today's standards the TurboStar's maximum interior headroom of 1.7m (5ft 6in) over the engine hump seems a little on the short side, in 1984 it was still impressive, making it a viable contender against Volvo's Globetrotter and Mercedes-Benz's Grossraum cabs. But what really drew long-haul drivers to TurboStar (apart from its big-banger V8) was both the level of finish inside the Italian stallion's cabin, and its sheer ride comfort. As CM's Tim Blakemore remarked in 1984 having spent time behind the wheel cruising the autostrada: "An air suspension seat for the driver is standard and combines with the new cab suspension and parabolic chassis leaf-springs to give excellent ride characteristics."

From the outside, TurboStar looked distinctly muscular, being 200mm wider than the old 190.30 as well as having a deeper roof panel and grille. Moreover, its front bumper, step moulding and wings made of grey sheet moulding compound (another innovation for lveco) further emphasised that impression.

Standard kit on the twin-bunk TurboStar cab included air-con (still a novelty on all but Middle-East-spec tractors), electrically operated windows and rear-view mirrors that could be adjusted from the driver's seat by means of a flexibly mounted remote control.

Then there was the generous stowage space including a cupboard for hanging clothes, and a lockable container for cash and documents. If you really wanted to push the boat out, a refrigerator and cooker were options. Climbing into TurboStar left you in no doubt that you'd moved up to a premium-spec flagship tractor, from the massive instrument panel with its monster rev counter (clearly showing the engine's green economy band) to the ergonomically angled dashboard — also noted by CM's Blakemore: "The dashboard has been redesigned and part of it now curves around the driver in a fashion

reminiscent of some American vehicles. But the general standard of driver comfort in the TurboStar leaves most American tractive units in the shade." In the mid-80s, big engines often meant big noise — not in the TurboStar. Iveco's engineers had clearly done their

homework. Through a mixture of new cab insulation panels fitted to the roof, floor pan, doors and other cab panels (not forgetting the pile carpets either) and by lowering engine revs around peak torque, the company claimed that the TurboStar's interior noise levels at 80km/h wouldn't exceed a whispering 70dB(A), even with a big-banger 420 under the hood. It paid off as Blakemore reported: "An impressive feature of all the TurboStars I drove was their low interior noise level; though I was not able to confirm their claim with a noise meter, my impression is that it is no wild exaggeration." An unusual colour co-ordination

The other thing about TurboStar was its interior trim colours: a bold mixture of grey and orange — a colour swatch not usually found in the average artic! But the move was a deliberate step to break out of the normal constraints. As Leonard Schmude, Iveco chief designer, said at the time: "We decided not to use brown and beige. Everyone uses these colours." Whatever the reaction from drivers, Iveco's marketing department was clear about its prime requirement in the new cab — that was simply more space, specifically more storage space everywhere for clothing, documents, bottles, etc; in short, all the things the average TIR driver took when they hit the road.

Perhaps the most lasting legacy of TurboStar was that it came at a pivotal point in Iveco's history, being, as the manufacturer says in its official history: "The first true embodiment of the consolidation of different cultures [and companies] which laid the foundations of Iveco." That ethos, coupled with the goal of building the ultimate flagship tractor would re-surface in 1994 when TurboStar's successor, the towering EuroStar broke cover. But that's a big cab story for another day. • • To find out more about classic trucks like TurboStar (or to read any past feature in CM), sign up to CM's archive by visiting http://archive.conunercialmotor.com/