Lynx was not to blame for runaway truck 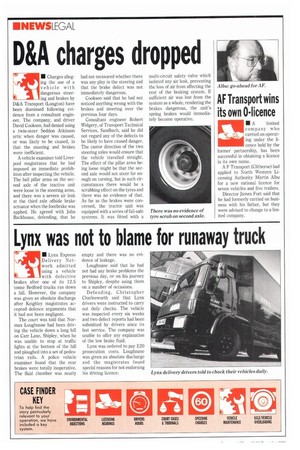 Page 16, 12th December 1991 — Lynx was not to blame for runaway truck
Close
Noticed an error?
If you've noticed an error in this article please click here to report it so we can fix it.
Keywords : Brakes, Land Transport, Transport, Road Transport, Railway Brake, Vehicle, Runaway Truck Ramp, Brake

E Lynx Express Delivery Network admitted using a vehicle with defective brakes after one of its 12.5 tonne Bedford trucks ran down a hill. However, the company was given an absolute discharge after Keighley magistrates accepted defence arguments that it had not been negligent.

The court was told that Norman Loughnane had been driving the vehicle down a long hill on Carr Lane, Shipley, when he was unable to stop at traffic lights at the bottom of the hill and ploughed into a set of pedestrian rails. A police vehicle examiner found that the rear brakes were totally inoperative. The fluid chamber was nearly