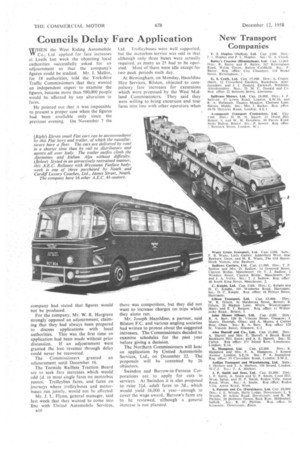 Page 44, 12th December 1958 — Councils Delay Fare Application
Close
Noticed an error?
If you've noticed an error in this article please click here to report it so we can fix it.
Keywords : Pricing, Fare, Nottingham Corporation Tramways

WHEN the West Riding Automobile IV Co., Ltd applied for fare increases at Leeds last week the objecting local authorities successfully asked for an adjournment so that the company's figures could be studied. Mr. J. Mellor, for 18 authorities, told the Yorkshire Traffic Commissioners that they wanted an independent expert to examine the figures, because more than 500,000 people would be affected by any alteration in fares. "

He pointed out that it was impossible to present a proper case when the figures had been available only since the previous evening. On November 7 the company had stated that figures would not be produced.

For the company, Mr. W. R. Hargrave strongly opposed an adjournment, claiming that they had always been prepared to discuss applications with local authorities. This was the first time an application had been made without prior discussion. If an adjournment were granted the lost revenue through delay could never' be recovered.

The Commissioners granted an adjournment until December 16.

The Teesside Railless Traction Board are to seek fare increases which would add Id. to most single fares on motorbus routes. Trolleybus fares, and fares on journeys where trolleybuses and motorbuses run jointly, would not be affected.

n10 Ltd. Trolleybuses were well supported, but the motorbus service was odd in that although only three buses were actually required, as many as 25 had to be operated. Most of them were idle except for two peak periods each day.

At Birmingham, on Monday, Hazel(line Hire Services, Biiston, objected to compulsory fare increases for excursions which were proposed by the West Midland Commissioners. They said they were willing to bring excursion and tour fares into line with other operators when there was competition, but they did not want to increase charges on trips which they alone ran.

Mr. Joseph Hazeldine, a partner, said Bilston F.C. and various angling societies had written to protest about the suggested increases. The Commissioners decided to examine schedules for the past year before giving a decision.

The Northern Commissioners will hear an application by United Automobile Services, Ltd., on December 22. The proposals will be contested by 26 objectors.

Swindon and Barrow-in-Furness Corporations are to apply for cuts in services. At Swindon it is also proposed to raise 21d. adult fares to 3d., which would yield £6,000 a year—enough to cover the wage award. Barrow's fares are to be reviewed, although a general increase is not planned.